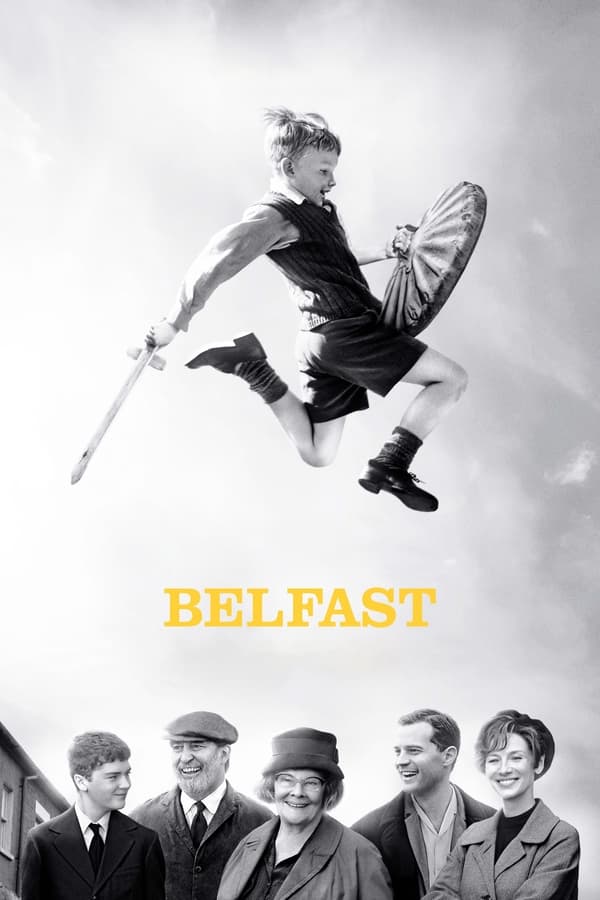 Belfast was always going to be interesting watch for me. See the events that occur during this film have always been a dark, deep secret in my family. When I was growing up whenever I asked why my family left Ireland I was always told my uncles and aunts “It was because of the trouble there!” Nobody ever saw fit to explain to me what ‘the trouble’ meant although I started to piece some things together when I could eerily remember news footage on our TV from the era when the IRA seemed to be conducting attack after attack.

Because of my lack of knowledge and the questions that had filled my head for years I went into Belfast deciding that perhaps once and for all this would be the film that would explain and show to me what “the trouble” was and why it was so bad that people were willing to pack up their belongings and move to the other side of the world.

With Belfast director/screenwriter Kenneth Branagh (Thor)does exactly what I hoped he would do, he not only shows what exactly people from Northern Ireland mean when they say ‘The Trouble’ he also humanises it from the events that happened to himself and his family.

Branagh tells the story through the eyes of young school-boy Buddy (Jude Hill – Mandrake) who spends his days playing in the street with the other kids and trying to catch the attention of the girl he likes in class.

Life is pretty simple – his Pa (Jamie Dornan – Fifty Shades Of Grey) is often away working, but always returns with a new Matchbox car for Buddy’s collection. His Ma (Caitriona Balfe – Outlander) also works but spends a lot of her time stressing that they will never pay back the debt that they find themselves in.

But suddenly that whole life changes. As Buddy is playing soccer in the street one day a rowdy horde attacks his street and suddenly he witnesses the division between Catholics and Protestants for the first time. With some of the local ‘toughs’ putting pressure on Pa and Buddy’s older brother Will (Lewis McAskie – Here Before) to join the cause soon Buddy realises that his family are going to have to make some tough decisions, especially given they are such a tight family unit that includes Granny (Judi Dench – Skyfall) and Pops (Ciaran Hinds – The Woman In Blake).

To his credit Branagh doesn’t sugar-coat the events that occurred in Northern Ireland during the 1960s nor does he over-sensationalise it either. You can tell what we have here is a true account drawing upon the things that Branagh most likely saw himself. What I found uncanny about the way that he has put this film together is that he truly captures this from the point of a view of a child.

With the world collapsing around them Buddy concentrates on the things that are special to him – his school crush, his Matchbox cars and getting to go to the cinema to see Chitty Chitty Bang Bang for the first time. I have found that few director/screenwriters have managed to do that over the years. Normally when a screenwriter looks back and tries to write about something that experience as a child or a teenager they subconsciously put things in there that only an adult would see or comprehend… Branagh certainly doesn’t do that.

Some film goers might be hoping that Belfast is full of street battles and fight sequences but thankfully that isn’t what you get here. Branagh concentrates on the human toll that an uprising like this cases and leads to. This is very much the story of a family unit that can see that this is no environment for their children to be in but because of circumstance they are trapped. Some of the most powerful sequences throughout this film include the ones where Ma and Pa clash over the concerns they have for the future of their family.

What I found also made this film so special were the performances of its core performers. Belfast will do for Jude Hill what Billy Elliott did for Jamie Bell. Hill is a star with the world at his feet, the only other child actor performance I think that has ever impressed me as much as this one is Tom Holland in The Impossible.

Hill is also well supported but never over-shadowed by the stars around him. The scenes he shares with Judi Dench are absolutely magical while Dornan and Balfe share some of the more intense and memorable scenes of the film.

I would recommend Belfast to anyone that loves a good character drama. Branagh’s directional skills here are top notch while young Jude Hill is a future star to watch.