AWS qualified for the Grand Final of Eurovision 2018 – vote for metal on saturday!

AWS –  a hard working, underground modern metal band did it again: after they won the local Eurovision Song Contest – with the support of the whole local scene from the major rock bands till’ the underground death metal fellows – they qualified for the Grand Final of Eurovision 2018.

We would like to thank for all of your support so far! Every single post, encouraging word brought the boys one step closer to the success. A young, talented modern metal band coming from the depth of underground scene blasted the Eurovision stage yesterday and that is what we call magic. The magic of metal unity. Please help them with a share to make it happen!

So here’s the time to join our forces again! How to vote in the Grand Final?
source: eurovision.tv/vote

If you are in one of the 43 participating countries you can vote in the contest.

After all songs have been performed, you can vote for your favourites for ±15 minutes. You can vote by telephone and SMS through the numbers shown on your screen, and via the official app. Rates and legal terms will be shown on screen.

You can vote up to 20 times, but you cannot vote for the country you are voting from.

Televotes make up 50% of the result, the other 50% are being determined by a professional jury in each participating country.

The official Eurovision Song Contest app is your ultimate second screen tool during the live shows, available for your iOS, Android and Windows device. You’ll get live information about the participants, shortlist your favourites and vote. After voting you get a special video message from your favourite contestant. The app also features the latest news, videos and backstage photo galleries, selfie filters and easy access to the songs.

AWS is unique not just because they are representing metal music and stage dives at ESC – also not afraid to shock the crowd – but presenting theirs song in Hungarian. All theirs behaviour is true to themselfs: pure feelings and acts from a nearly DIY band and a barefooted frontman. Please support the boys, support metal! 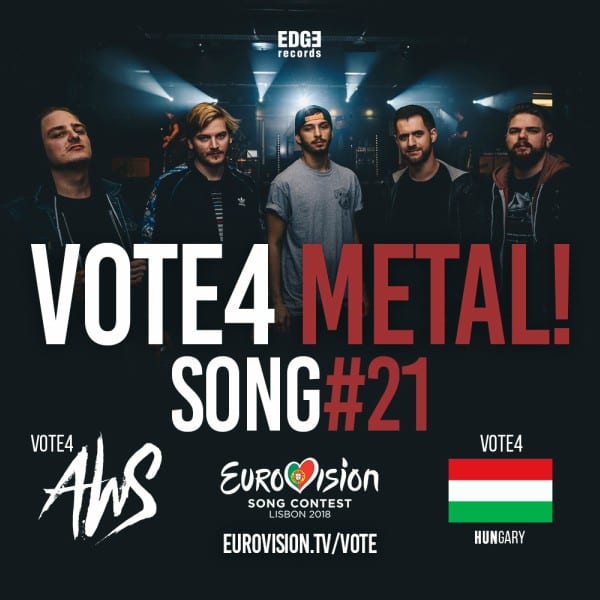