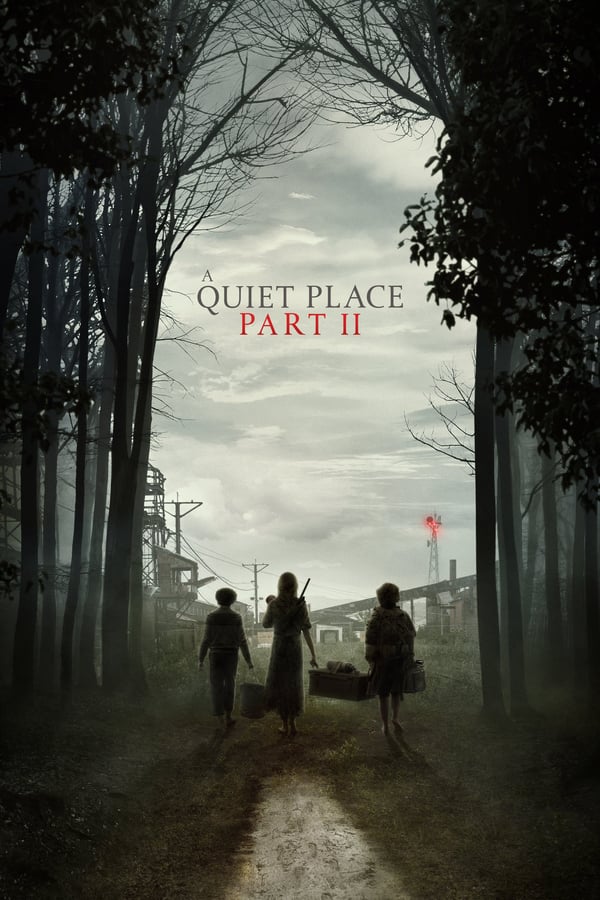 A Quiet Place was the 2018 surprise hit film directed by John Krasinski and starring himself and real world wife Emily Blunt as Lee & Evelyn Abbott, parents to Regan and Marcus played by Millicent Simmonds and Noah Jupe. Largely set a year and a half after strange brutal monsters have wiped out most of humanity by attacking anything which makes a sound. The film followed the Abbotts as they try to make a literal quiet life for themselves on their farm in this new world of terror as they expect the birth of a new child. One day a series of events lead to the family being stalked by at least one of these creatures (there are 3 in the area), during which Evelyn gives birth, Lee is killed and Regan, a deaf teenager, discovers that the hearing aid her father made for her while it doesnt help her hearing emits such a frequency that weakens the monsters impervious shell allowing for the family to finally take down the creature with aide of a shotgun. The film ends with a cliffhanger as 2 more monsters race to investigate the explosive sound.

A Quiet Place part 2 picks up directly after these events,  besides a flashback, where Evelyn, her 2 children and newborn infant are forced to flee their farm in search of aide and a new place to call home. They quickly come into contact with Emmett (Cillian Murphy) a neighbour with his own tragic story and former friend of the Abbotts in the old world. Upon hearing a radio broadcast the survivors set out to see if they can reach the source and if with Regan’s earpiece they might be able to honour her father Lee by providing some sort of larger scale fight back against these, until now, seemingly unbeatable monsters.

A Quiet Place was a movie that i personally didn’t enjoy nearly as much as many others did. I found it to be a film with quite an interesting premise and being set in a world where characters had to remain as silent as possible I was really interested to see how it played out. Unfortunately while the movie featured a talented cast of actors, impressive special effects and effective jump scares the writing and world building I found somewhat lacking & hurt the believability of the film.

The thing which bothered me most watching the movie was that while I found John Krasinski had done an amazing job in taking a horror story of such an odd nature with little to no spoken dialogue and making it work extremely well, the film by its very nature almost encouraged the audience to think “why don’t they do this, why don’t they do that”. Some of this second guessing is inevitable with a genre film such as this but here was a movie with great actors, looked amazing and incredibly was never boring despite such long and silent moments when one could argue not much was happening. However I have to assume that most of the audience would like me be thinking about what they would find themselves doing in a situation such as the Abbotts found themselves in and this is just sitting in the audience for 90 minutes, the Abbotts have been living in this world for a year and a half and we see the story opens with the death of one of their children. If we the audience can think “maybe they should be living near that waterfall which provides cover for sound” maybe the Abbotts should have thought of these things as well. If I would carry around an egg timer or, hell, even a rock just to throw to the side to provide some sort of distraction for these blind creatures who hunt by sound maybe Lee Abbott should be as well.

It was an interesting movie and I was impressed that it made for such a unique cinema going experience where the audience feels the need to keep as quiet as possible like say a deep sea movie would encourage us to hold our breath. Some parts of the film I quite liked such as the family having a deaf daughter and knowing sign language, rather than this being a ridiculous coincidence I saw it as a reason that the Abbotts have survived so long, they already knew how to communicate with each other silently. But as the plot contrivances and holes began to pile up I couldn’t find ways to explain them all away.

A Quiet Place 2 however I found to be a different case. A lot more is happening here with much of the film surprisingly not focusing as much on Emily Blunt’s character but on Regan and Emmett as they go on a quest of there own to reach what they hope will be a settlement and more survivors. The question is would they be people worth saving.

Despite the original film’s cliche’d “she cocks the shotgun and it cuts to credits” apparent sequel bait ending I can 100% believe that John Krasinski is being honest when saying that they never intended to make a sequel. Reason being is remember those 2 monsters that were racing to destroy whatever had made that shotgun blast? Well they both disappeared from existence which makes watching this movie as some sort of double feature quite humorous indeed as an immediate threat is set up only to be instantly forgotten about. Having the remaining Abbotts quickly dispatch 2 monsters in the film’s opening when a single creature had stalked them the entire previous movie may have nerfed the central threat of the series a little but still Kathy Bates’ character from Misery would be pissed at such inconsistency.

A lot of this movie is put on the shoulders of both Cillian Murphy and especially Millicent Simmonds. Simmonds as Regan trying to do what her father would have done and Murphy as Emmett a man who has lost everything, including possibly his mind, needing to protect his dead friend’s daughter both provided incredible performances which more than carry the film. Cillian Murphy is one of the most talented actors of his generation and fits well into his role giving us a character we’re not sure if we can trust or not.

Emily Blunt somewhat falls to the side in this film which is a pity but while the last film’s theme of protecting one’s children suited her having a much more substantial role, this film’s theme of children growing up and leaving the nest means it wouldn’t have worked here. On that note in fact I was somewhat disappointed that the character of Marcus and Evelyn’s roles in the latter half of the film had been exchanged. Not to give anything away but this movie features a scene that makes the previous films stepping on a nail look preferable. The result is that Marcus is forced to stay mostly in one location taking care of a newborn while Evelyn goes in search of medical supplies. I couldn’t help but think both their actions could have been swapped around with Evelyn being in the unfavorable position of having both her son and daughter out in the wild with her unable to do anything to help them. Especially considering that Marcus’ character arc in this film, not to mention the whole “leaving the nest” theme, would have fit better had he been the one forced by circumstances to be the protector rather than the one being protected.

The film has plenty more going on in it this time than in the last film. The characters moving from one location to another rather than the entire film being set in one fortified location also avoids the issues I had with world building in the previous movie. The characters act in a more believable way as they are thrust into dangerous situatuons that occur naturally rather than preventable situations they should have prepared for.

As the narratives split to 3 different focal points throughout the story it must be said that a credible job is done to seemlessly jump from one storyline to another without awkwardness or lapses in tone. As tension builds with Marcus exploring his surroundings and not knowing what he will find or what will jump out at him it also is gearing up with Regan and Emmett on their quest.

Once again the movie makes for an incredibly tense cinema going experience. It really goes to show Krasinski’s ability as a director that he can have 100s of people sitting in a room deathly silent on the edge of their seats too afraid to be the one to disturb the quiet by crinkling a bag of crisps and woe betide anyone who forgot to put their phones on silent as they’ll earn the scorn of an entire cinema moreso than usual.

Rarely do I find myself enjoying a sequel as much or more than the original and even more rarely do I find myself such a fan of a sequel to a film I didnt really care for. A Quiet Place Part 2 like Happy Death Day 2U is one of those freak occurrences. I was surprised when this movie got pushed so far forward from its initial 2020 release date with no question of an on demand release. However with its small and talented cast directed with an impressive eye for tension and jump scares this is a genre film the likes of which deserves to be seen on the big screen as much as any huge blockbuster. The interesting premise of the original film is still going strong here and I’m interested to see where the franchise could go from here.