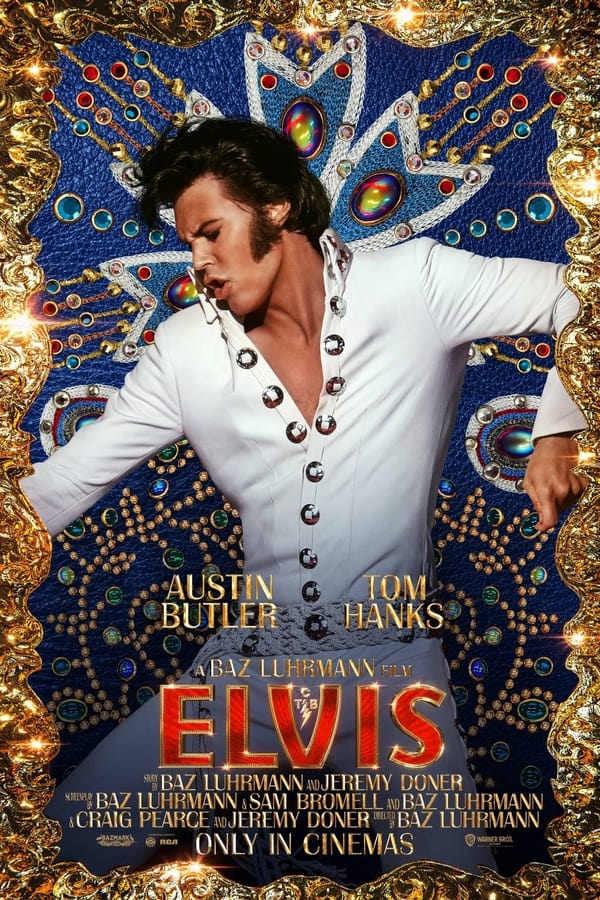 Nobody makes films like Australian director Baz Luhrmann. Luhrmann’s own style of filmmaking was there for all to see with his 90s hit Strictly Moulin. From there he went from strength to strength wowing audiences with his own take on the classic Shakespearian tale of Romeo & Juliet and then of course came the gem in his crown – the visually spectacular Moulin Rouge. It seems the only blemish in Luhrmann’s career to date was the sub-standard Australia that made the country it was named after cringe.

When you think of the loud music and the glitz and glamour that Luhrmann loads his movies with you soon realise that he is the perfect filmmaker to bring the story of the great Elvis Presley to the big screen. Presley like Luhrmann was a glitzy showman who shone brightest when the spotlight was him and to the former’s credit he captures all that and more with his latest epic – Elvis.

Told through the eyes of Presley’s (Austin Butler – Arrow) long-time manager Colonel Tom Parker (Tom Hanks – Castaway) Elvis follows Presley’s career right from the earliest days when he performed to make money for his parents, Vernon (Richard Roxburgh – Van Helsing) and Gladys (Helen Thomson – Kangaroo Jack) through to Parker signing a long term deal that would see him perform some of his most energetic shows on the Vegas.

Along the way we see the young Presley working with musicians such as Little Richard (first time actor Alton Mason) who helped form his now famous sound and also his more personal moments especially as his relationship with Priscilla (Olivia DeJonge – Better Watch Out) begun to blossom.

Most will go into Elvis expecting a movie that is full of glitz and glam but lacks substance, in reality though nothing is further than the truth. Luhrmann surprisingly digs deep into the live of Elvis Presley and touches on some of the darker moments and events that happened throughout his career.  Topics such as racist politicians and law enforcement officers targeting Elvis during the early days of his career are explored in great depth and ground the film, it is a rarity to see Luhrmann tackle serious subjects like this in his films but he shows here that he is more than capable of it.

Likewise despite the fact the film is told through the eyes of Parker Luhrmann allows the film to explore many of the allegations brought against him. Early on Parker while acting as narrator defends himself saying he never did anything to harm Elvis yet later we see him recounting times when he pushed the man to the limit of exhaustion fuelling his drug habit while making selfish decisions that would benefit him but damage the career of the man he supposedly cared for.

Perhaps Luhrmann’s hand on the film really comes to light though during Presley’s Vegas years. The flashy neon lights and the fast pace of Las Vegas are perfect fodder for Luhrmann’s style of filmmaking and the scenes of Elvis on stage in Vegas are some of the highlights of the film – especially given that Austin Butler’s performance is so believable that it feels like you are watching archival footage.

In fact it probably isn’t out of place to suggest that Butler could easily earn an Oscar nomination for this film. His performance here is faultless as he literally seems to become Elvis. His singing voice mimics the King to a tee what his dancing ability is off the charts. When you mix that with his fine acting performance that takes him through all the emotions what you see here is one of the best acting performances of 2022.

This is also one of Tom Hanks finest acting performances to date, and that is saying something given the calibre of Hanks’ previous roles. He seems to embrace being able to play Parker as a type of villain and his performance is one of the most memorable things from the film. Likewise Olivia DeJone is stunning at Priscilla, she may have limited screen time but she makes use of what she does have.

Elvis far exceeds the expectations that many will have from it. The serious tone of the film is a huge step up and a surprise from Luhrmann. He keeps control of this film remarkably well knowing the right times to unleash his glitzy brilliance and when to hold it back for some of the films more serious moments. Together Luhrmann, Butler and Hanks have created something very special, something that is one of the best films of the year.