If you are one of those people that likes to get genuinely scared in the cinema – then Greta is the film for you. Directed by Neil Jordan (Breakfast On Pluto, The Butcher Boy) Greta is a psychological thriller that pits the young, naive and new to New York Frances (Chloe Grace Moretz – Kick-Ass, Carrie) and her partying solicite friend Erica (Maika Monroe – The 5th Wave, It Follows) up against Greta Hideg (Isabelle Huppert – Elle, Things To Come) a seemingly innocent old lady who it turns out will do anything for companionship – and I mean anything.

Star of the movie Chloe Grace Moretz says she wanted to be a part of the movie from the very first moment she read the script. “I was very excited by it when I first read the script,” she says. “As an actor you read so many different stories and you go through so many different characters that you potentially may want to play and when I first read this one it kind of just struck me with the excitement of a movie that I hadn’t seen for many years. It was the type of film that we were making in the 90s and also the 80s and they just aren’t really made anymore – a smart thriller with real acting and real moments in it but it is encompassed in a really scary and suspenseful story.”

“She is just really roar,” she explains when the conversation turns to how she would describe her character of Frances. “When you are really beaten down and a really open book then you become perfect prey. So I would just say that she is really open currently and wants a mother and wants that kind of maternal aspect in her life that she hasn’t had for a long time and that opens the door for Isabelle’s character Greta to come in.”

She laughs when she has to describe the character of Erica and the important part she plays in Frances’ life. “Erica is just a really good friend and the voice of reason in the film,” she laughs. “She is the voice of reason when Frances is talking about Greta and making dinner and making all these plans with her and Erica is kind of like ‘what the hell are you doing, dude? That is really strange of you’ And I think that is what everybody in the audience is going to be thinking as well.”

Audience members might also be wondering how an intelligent person like Frances can be lured into Greta’s game but Moretz says that is not all that surprising. “She truly believes that person is a friend, she believes that this woman comes from a sense of refinement,” she explains thinking back to how Frances would perceive Greta. “She thinks she has been well raised and she thinks she is very smart. And Greta is a very smart character but you could also see her almost as a helpless bag-lady in the first draft of the script that I read, but when Isabelle came in she made her so much more interesting and so much more terrifying.”

One of the hardest things to do when talking about Greta is to pigeon-hole it into a genre because outside of the suspense and thrills there is so much going on. “It is almost a romantic thriller in a weird way,” agrees Moretz. “It’s not a sexual thriller but i think there are provocative moments in it at least, especially with the use of emotion. And I think the relationship with Greta and Frances is a very interesting relationship that is hard to put the finger on and it is really obsessive. It is a wild movie and I think it is going to be a really wild roller-coaster ride where I think people will also find really tangible performances in it and each women’s performance in it is very important and it is not cheesy and it is not heightened, it is very realistic and very naturalistic and I think you get taken on a ride where things happen that you don’t expect to have happen – it’s like you get sucker-punched when you just went in for a hug.”

Greta is in cinemas now. 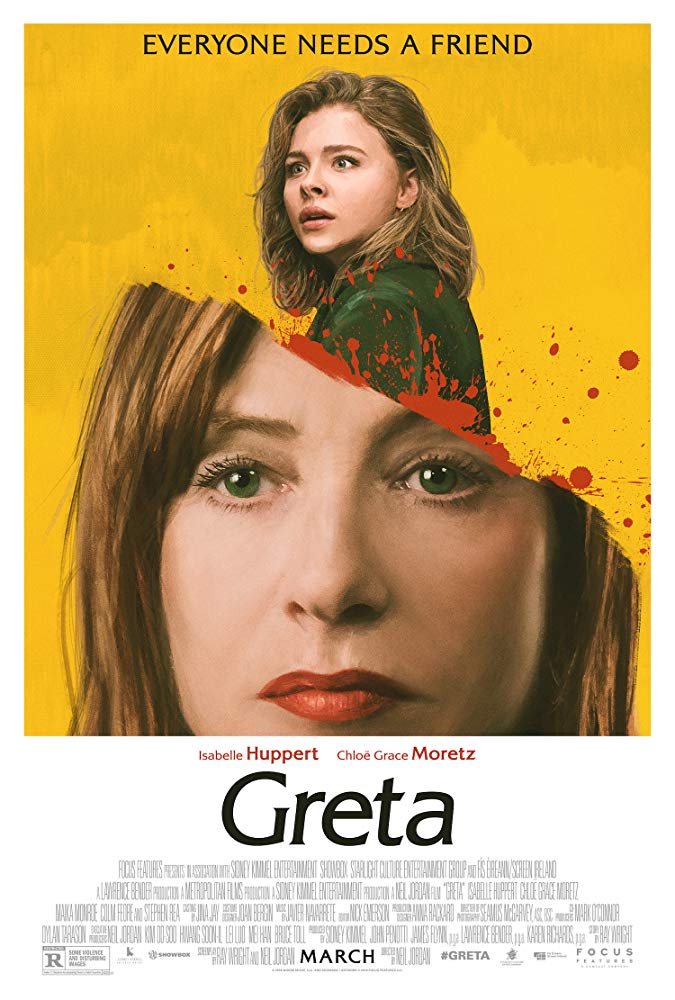