Trailers! They make or break a movie. Often in my reviews I have talked about the fact that a trailer has spoiled a movie for me – either by giving away all the gags of a film, or committing the even worse crime of ruining the suspense of a film by giving away spoilers. With Alpha though the trailer did exactly what it should do – and that is make me want to see the film. Of course seeing that the film was held up in production for over a year beyond its original release date, that made seeing the trailer and wanting to see the film straight-away absolute torture.

Set during pre-white history in Europe Alpha follows a young tribal member, Keda (Kodi Smit-McPhee – Let Me In, The Road), who is at the awkward stage of his life. He is on the verge of becoming a man… something that is of course held in a lot higher esteem in tribal culture to what it is today, but still very much has the innocence of a child. Making Keda’s journey into manhood even more difficult is that his father, Tau (Johannes Haukur Johannesson – Atomic Blonde, Game Of Thrones), is the tribe’s leader and both he and the tribe expect Keda to become the next great warrior, leader and hunter. The problem is Keda is nothing like his father… he has a soft heart and lacks that ‘killer’ instinct.

Sensing an urgency to push his son into manhood and prove his worth to the tribe Tau ignores the concerns of his wife, Rho (Natassia Malthe – Elektra, DOA), and initiates  Keda into the tribe before taking him on the annual Great Hunt – a dangerous mission that it seems not everybody is destined to return from. After Keda then becomes separated from the rest of the hunting party, in a violent and creative way, he must then use all the skills that his father has taught him to survive while befriending a wolf that should technically be his greatest enemy.

On the surface Alpha plays out as your traditional Disney boy-meets-dog story. A lost boy meets a stray dog and the two become unlikely friends, it is a story that we have seen many times in cinema. What makes this film so different is the setting and the fact that Albert Hughes (The Book Of Eli, From Hell) is in the director’s chair. This may be the first time that Hughes has worked on a feature film without his brother by his side but Alpha has the stark and dark beauty that the Hughes Brothers have managed to capture in all their films. Alpha is a dire film, around every corner is a new danger that has the potential to kill Keda or any member of his tribe. It is also a cold and unrelenting climate that never gives humanity a break yet somehow Hughes manages to make it so hauntingly beautiful up on the big screen that I found myself disappointed that we weren’t seeing it in IMAX. The knack of doing this seems to be a Hughes’ trait as we saw him and his brother do exactly the same thing with the apocalyptic landscape of The Book Of Eli.

The beauty of Alpha does distract you from the fact that the storyline of Alpha is simple at best. Amazing landscapes and epic night skies seem to enhance the suspense throughout the film and while Hughes and his screenwriter, first time writer Daniele Sebastian Wiedenhaupt, always manage to come up with creative ways to place Keda’s life in danger the film does dip quickly towards the end with what feels like a satisfying if not rushed finale. And despite the fact that I did enjoy the film it does feel like something is missing. Throughout the film it feels like something is being set up that will see trouble stirred up for Tau by his right-hand man, Sigma (Marcin Kowalczyk – You Are God, The Lure) but nothing ever eventuates giving the feeling that perhaps something was edited out. That feeling is further enhanced by the fact that all the adult characters seem to just disappear, apart from a dream sequence, during the time that Keda must begin his relationship with Alpha.

The funny thing about Alpha being a coming-of-age story for Keda is that the film itself feels like a coming-of-age vehicle for Kodi Smit-McPhee. Film lovers have grown up watching Smit-McPhee on the screen. Yes he has put in some powerful performances in films like the gripping Matching Jack and films with wide appeal like The Road and Let Me In, but he has always been seen as a child actor. Even playing Nightcrawler in the Marvel universe has not been able to shake that stigma, here though it seems Smit-McPhee has been re-invented as a man. He is the same gritty actor but seems ready to take on more adult roles in Hollywood.

Alpha is an amazing film, in fact in places the director has made this look like a work of art. Cinematic landscapes and amazing CGI make the film feel historically accurate and work of beauty. There have also been some brave choices that have made Alpha a better film as well. The choice not to have the actors speak English gives more feeling to its authenticity but also seems like Hollywood has finally realised that subtitles are more than okay. Alpha could be one of the surprise hits of 2018. It’s dark beauty reveals there is more to Albert Hughes as a director than we knew and also shows that Kodi Smit-McPhee is still one of the most promising actors in Hollywood. 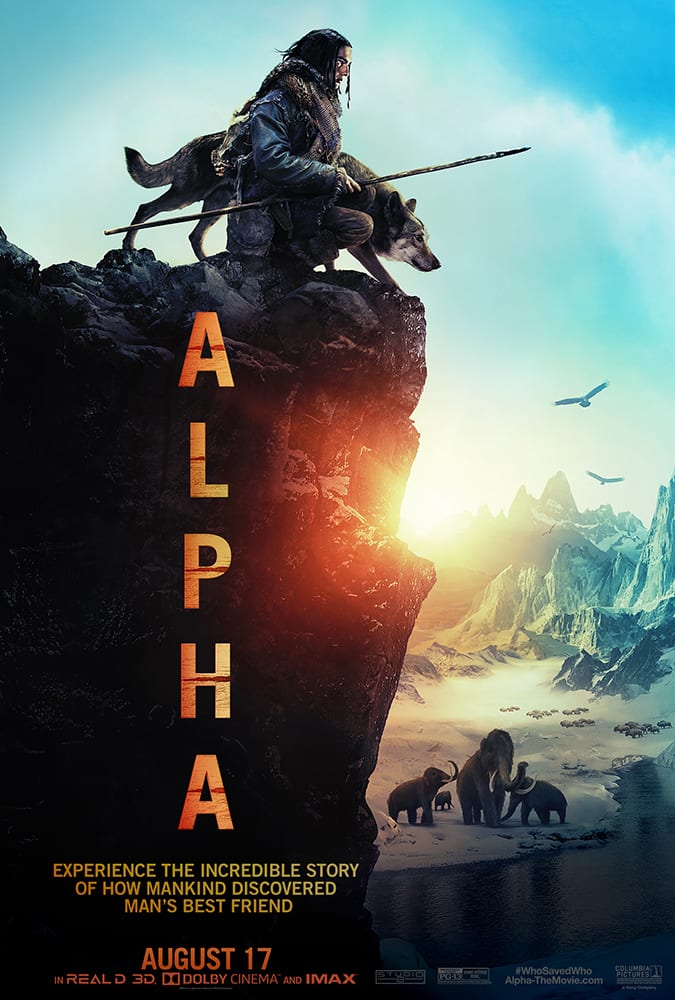