When you think of space exploration we now days think of the romanticised Hollywood version of space travel. Unless you can think back to realistic movies like Apollo 13 it is easy to forget that it only takes a second for space exploration to become a nightmare for all involved. Sure we have sci-fi movies like Aliens that enhance the extra-terrestrial horror that many believe might be out there, somewhere, but very few films capture the horrors of the unknown and the impact it had on its first explorers like First Man does.

Director Damian Chazelle (Whiplash, La La Land) doesn’t have to develop scary looking aliens in order to create horror for intrepid test pilot and engineer Neil Armstrong (Ryan Gosling – Drive, Blue Valentine) and his wife Janet (Claire Foy – Season Of The Witch, Vampire Academy). Like he did with Whiplash Chazelle just shows human life in its purest form… which for this family provided more horror than most couples could withstand. From the loss of their daughter which led to Armstrong joining the NASA Space Program in the first place, dangerous test missions that place Neil’s life in danger nearly every day through to the anguish that Janet endures on the days she knows that her husband is doing such tests. Chazelle just stirs the pot and lets the human emotions in the film bubble and boil until they explode.

Neil and Janet’s solace come from their best friends Ed White (Jason Clarke – Zero Dark Thirty, Terminator Genisys), his wife Pat (Olivia Hamilton – Don’t Worry He Won’t Get Far On Foot, The Last Tycoon) and Neil’s immediate boss the caring yet determined Deke Slayton (Kyle Chandler – Friday Night Lights, Argo). Even so Pat and Janet’s ‘talking’ is normally disguised as children’s play dates, Neil seems happy to talk to Ed about the mission but pushes him away when the talk turns personal and while Deke does what he can to help his test pilots at the same time he is the man who has to make tough calls like switching off intercoms so wives can’t hear their husbands in peril and writing death announcements for missions he has to appear to be ‘confident’ for.

First Man could have easily suffered from Titanic-syndrome, a film where the audience knows the ultimate outcome and therefore just sits on the edge of their seat waiting for the expected finale but here Chazelle, who is aided brilliantly by his screenwriter Josh Singer (The West Wing, The Post), takes the audience on a different kind of journey. He captures moments they never told us about during our High School science classes. The raw, claustrophobic feel a test pilot feels as he hurled into orbit in what seems like a sardine can that they aren’t even sure will make the journey, the moments that wives find out that their husbands haven’t returned from a flight and the protests that occurred in America when the loss of life made people realise that these test pilots were really guinea pigs in what seemed like a cruel experiment. Then of course there is the tension an astronaut’s job puts on his family life and here we see painful moments such as the one where Janet has to plead with Neil to tell his children that he may not come back from his moon mission.

Just like he did with Whiplash Chazelle also brings out the best in his cast and helps them bring their character’s pain and anguish to the fore. Claire Foy delivers her best role to date and if she doesn’t at least receive an Oscar nomination for this performance then something is seriously wrong. As an actress she delivers on every level as Janet is put through an emotional ringer and these are the kinds of performances that the Academy should be applauding – ones that test an actress and her acting abilities. Equally good is Ryan Gosling as Neil Armstrong. When cast as an All-American hero, a real life Captain America if you will, you wouldn’t expect an actor to have to become emotional dark and foreboding, but that is exactly what is expected of Gosling here. Forget his pretty boy looks because here Gosling calls on the acting skills that saw him create memorable characters in films like Drive or The Place Beyond The Pines… he is absolutely brilliant.

First Man is the first film of 2018 that I have seen where my thought throughout was ‘this needs to be an Oscar film.’ From start to finish it felt like the film was taking me on a claustrophobic ride with its characters. The sequences in which the pilots are conducting test flights are moments of sheer cinematic masterpiece, where visuals and sound effects come together in a way that creates a horror that you never expected. This combined by outstanding dramatic acting performances from its leads and again I find myself putting the five stars down on a Damian Chazelle film. First Man is sheer brilliance, a lesson in dramatic filmmaking. 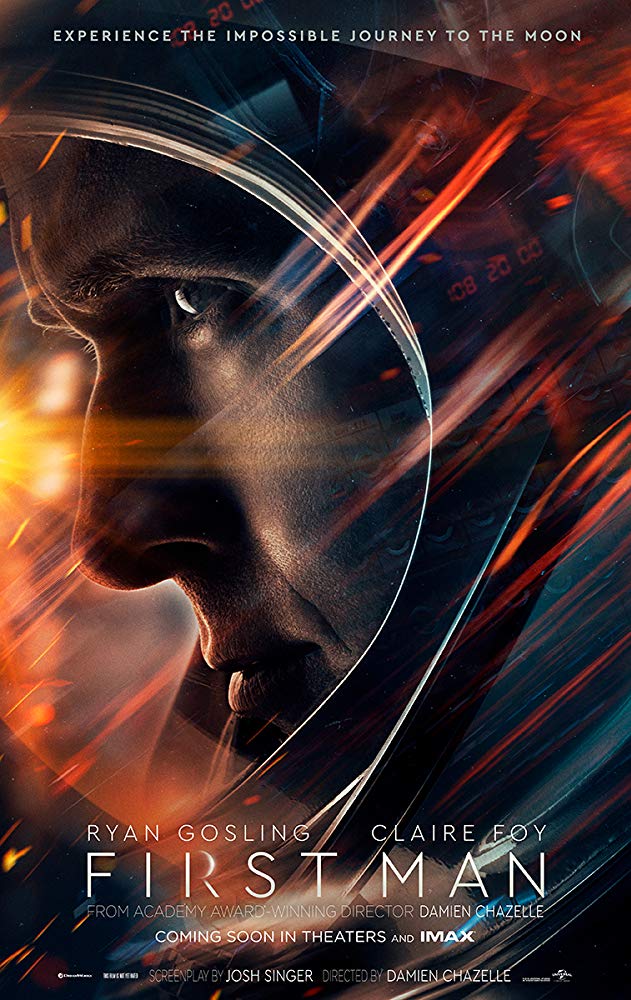