There are probably some people out there who are asking whether or not we really need another Johnny English movie. Well, after viewing the film I can tell you, yes we do because it seems like Johnny English is not only saving the world but saving our confidence in big screen comedy as well.

Great comedy has been pretty scarce over the last couple of years but Johnny English Strikes Again takes us back to our time when you used to go to the cinema and laugh out loud at whatever you were watching. The most remarkable thing about the film is that while it captures that great comedy spirit of the classic English comedies that we all know and love it is also modern enough to win over younger fans as well.

The film begins with England in peril. The Prime Minister (Emma Thompson – Love Actually, Saving Mr. Banks) is doing all she can to make herself popular when all of a sudden she is in crisis as a cyber attack on the Government sees all their MI-5 Agent’s identities exposed. Faced with no other options they are forced to call in retired agents such as the notorious Johnny English (Rowan Atkinson – The Lion King, Bean).

While English and his in-field partner Bough (Ben Miller – Paddington 2, What We Did On Our Holidays) bumble their way to finding out facts as they challenge the very beautiful Ophelia (Olga Kurylenko – Hitman, Oblivion) while the Prime Minister recruits tech-whiz Jason (Jake Lacy – Rampage, Carol) to try and solve all of their cyber-attack issues.

It sounds like a pretty simple plot but the thing is the film works. People who part with their hard-earned cash to see a Rowan Atkinson film go for laughs, not for a convoluted storyline… and laughs are what Atkinson delivers in truck-loads. Aided by talented screenwriter William Davies, who is the man behind great comedy films like How To Train Your Dragon, Puss In Boots and Twins, and director David Kerr (Inside No. 9, Fresh Meat) Atkinson is able to deliver what he does best – some completely outrageous sight gags and skits. Together these men are like some kind of unexpected comedy dream team, but really it shouldn’t be any surprise at all that they deliver a winning formula. Like Atkinson Davies has been making people laugh for decades and knows the Johnny English franchise exceptionally well seeing he wrote the past films while Kerr is considered one of the best current comedy directors in the UK, meaning he knows what modern day audiences want.

Where Johnny English Strikes Again works so well is the fact that it actually does make people laugh, something that not all modern day comedies do. Atkinson does steal the show but bounces off Ben Miller brilliantly well and the result is scenes such as their antics on board the super-yacht which had us all laughing out loud and the very, very funny VR goggles skit which hands down will go down in comedic history as one of the funniest comedy sequences in modern day film. The inclusion of things like the goggles shows that the filmmakers were in touch with modern society and this just isn’t a film that could have been set back in the 1980s. It understands modern culture very well and successfully puts an ‘older’ style comedy character into it with hilarious results.

Of course any true comedic legend needs a cast to bounce off and here Atkinson is very well supported. He and Ben Miller are exceptional together and you almost wonder if the pair should do a television series together. The scenes that Kurylenko and Atkinson also share are memorable. The writers haven’t tried to take Kurylenko out of comfort zone and make her funny, instead she reacts off Atkinson’s comedy… something that wouldn’t be easy to do but something she also does remarkably well. The other highlight here is Emma Thompson who just takes her role of Prime Minister and runs with it incredibly well.

Johnny English Strikes Back is everything we love about British comedy. It is simple but has you laughing out loud throughout and is film you can watch time and time again. Scenes like the VR Goggle scene are pure comedy bliss and Atkinson shows that after all these years he is still very important to the modern day comedy scene. Johnny English Strikes Back shows that sometimes the old way is still the best way to make somebody laugh. 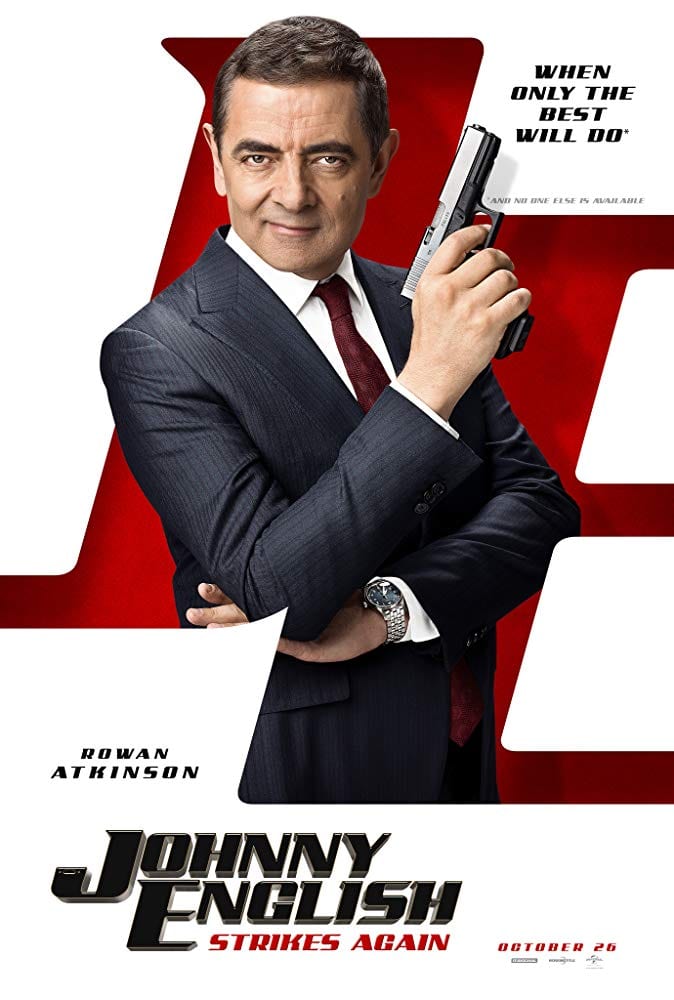 PrevPreviousSTAN To Screen THE BISEXUAL
NextWhat You Missed At MADFEST 2018Next