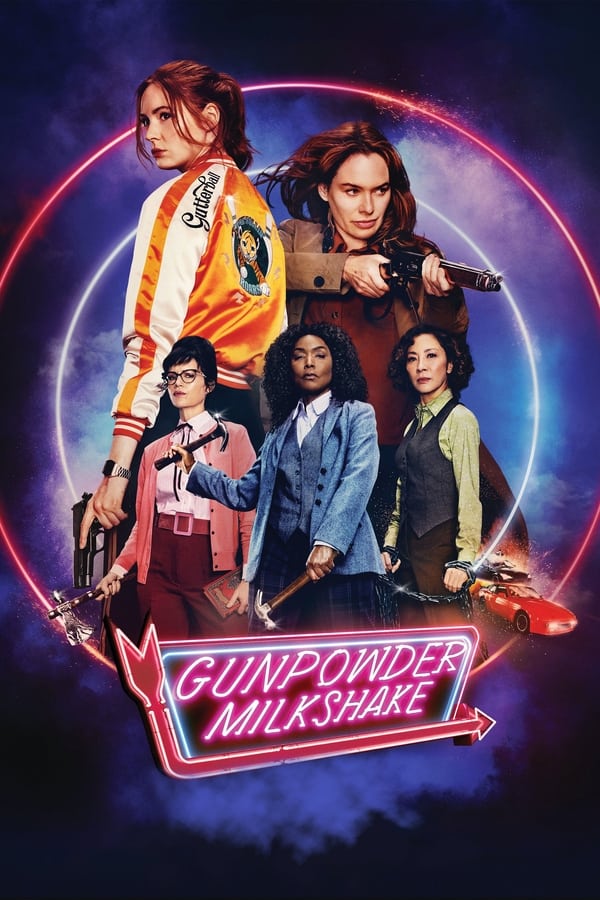 People who have only just discovered my reviews over the past twelve months will probably think that I am the kind of person that loves films that are obscure and arty… and they wouldn’t be wrong. But I am also a very big cult genre film lover as well. I’m the kind of person that buys a season pass to a festival like MonsterFest simply because I don’t want to miss anything that screens there. Keeping that in mind and given my love for films like Baby Driver and the work of Quentin Tarantino there was always a good chance that I was going to like Gunpowder Milkshake.

From Israeli born cult film maker Navot Papushado (Rabies) Gunpowder Milkshake is a film that I enjoyed so much that I decided to watch it twice before it had even been released in Australia and to be honest I have shut up about it since I watched it.

It centres around deadly assassin Sam (Karen Gillan – Guardians Of The Galaxy) who does every dirty job that her employer – the criminal organisation known as The Firm – tells her to do. That loyalty comes from the fact that The Firm’s head honcho, Nathan (Paul Giamatti – Cinderella Man), took her under his wing after her own mother, Scarlet (Lena Headey – Game Of Thrones), abandoned her.

Now though Sam finds herself on the run after killing somebody she shouldn’t have. That leaves her trying to protect the life of eight year old (sorry eight and three quarters) Emily (Choe Coleman – My Spy) while turning to Scarlet’s mentors the mysterious group known as The Library – Anna May (Angela Bassett – Black Panther), Florence (Michelle Yeoh – Crazy Rich Asians) and Madeleine (Carla Gugino – Watchmen) – for help.

For me Gunpowder Milkshake has the perfect mix of style and substance. Papushado creates a noir look throughout the film that mirrors what we have seen previously in films like Baby Driver and Drive but is also skilled enough to give this film its own edge. With movies like John Wick and Nobody surfacing over the past few years the only way a director can make an ultra violent film like this and do things a little bit differently is to be creative with their fight sequences and it is here that Papushado comes to the fore.

The fight sequences in this film are creative and memorable. Yes, despite the flood of these types of films recently Papushado comes up with creative ways to kill and maim people while still making the plot viable and better still having the audience warm to Sam and of course The Library.

I’m sure I am not alone when I say that I ended up becoming so interested in the characters in this film that I started to plot ways the franchise could continue. Of course I would love to see a sequel but I also feel this franchise could benefit from a prequel that shows a younger Scarlet first teaming up with The Library. Yes despite the brilliance of Karen Gillan throughout this film, and she truly is amazing, it is Angela Bassett and Michelle Yeoh that steal the show. If a prequel was made about their characters then I would be one of those people yelling “shut up and take my money.”

The star here though is Gillan and she does enough in Gunpowder Milkshake to warrant the term ‘action star’ to be added to her resume. She delivers a powerful performance here and is well supported by young Chloe Coleman who continues to show why she is one of Hollywood’s next big things. Then there are the scenes between Gillan and Headey which again added a whole new element to the film.

If you don’t like graphic violence then Gunpowder Milkshake is not the film for you – if you do then you are in for a treat. With a serviceable plot, a noir feel and female leads putting in memorable performances this is a film that is going to wow you from start to finish.