The film on everybody’s lips at the moment is Peppermint. Seemingly coming from nowhere the launch of the film’s trailer suddenly had film buffs right around the world talking. Movie lovers in the US started pre-booking tickets straight away… why? Because this film looked kick-ass. That’s it pure and simple.

For those who haven’t seen the trailer yet, Peppermint comes from the director, Pierre Morel, the man who brought us the original Taken film. Morel is back with a genre that he genuinely understands revenge-action because in Peppermint we find a mother, played by Jennifer Garner out for total revenge. Yes, Garner has pulled away from the serious dramas that she has been making over the past few years and returned to the action sequences that made her famous in the hit television Alias .and she couldn’t be happier.

“I was super excited the first time I read the script for Peppermint because it is an original story… it is not based on anything, and that just doesn’t happen anymore,” she explains. “There is also a strong woman at the middle, and I felt like that I hadn’t done action for such a long time, I did in the past but I hadn’t done it for so long and I felt like it was a bit of a missed opportunity because what would you fight for more than your family and I have never really had the chance to play that kind of visceral need to protect and defend somebody in your family. To be honest, I had not shot a fight since The Kingdom, and my daughter was learning to crawl on that movie… she is now twelve. So that must have been eleven plus years ago and that is a long time to hang up your action traps and then try to pull it back together. But I knew that I could do it, I know how to train, and I know the discipline that you need, and I knew exactly what I would have to do to make it happen.”

Working on Peppermint though saw Garner have to do a style of training that she had never done before. “I had never trained in boxing,” she explains. “So I had to see this trainer every day for at least an hour, and I would box with him. Then, on the weekends I would do a few hours with the stunt team, and they would come over and take me through the paces – that was with boxing and kicking, and then they would slowly bring in the choreography. But then on the side, I was spending time with the Navy Seals on the gun range. I had worked with them before on different films, so I had a basic understanding of how to handle a weapon, how to change a mag but still, it had a been a long time, so I just needed t get out there and do a lot of work.”

She goes on to explain exactly why her character becomes a woman on a mission. “Riley’s husband Christopher is a mechanic, and he has been working his tail off but he so desperately trying to give his family what they don’t have which is financial security. Especially because it is right around Christmas and it is their daughter’s birthday, that he flirts with the idea of taking a job that would put him with some unsavoury characters and that would be breaking the law. He ultimately decides not to do it but by the time he makes that decision the unsavoury characters on the other end of the transaction have found out about his possibility of doing something against them and they kill him and his daughter on her birthday night. So my character Riley sees this happen right in front of her, she sees the people that kill her family, and she loses her mind of course. She is injured and when she comes to she immediately decides that she wants to bring these people to justice and she decides that they should go to jail. But she shuts down, she goes into hiding and spends the next five years becoming a machine with absolutely nothing honing MMA skills, knife skills, gun skills, the ability to stitch herself back together. She can re-set her bones, the ability not to feel pain – physically or emotionally – and to get out there and fight for her daughter. So on the fifth anniversary of her daughter’s passing, which is also her birthday, she shows up in L.A. and is ready to do what she is ready to do.”

Of course, having Pierre Morel who created one of the best action films of all time on board adds another element to Peppermint, and that certainly wasn’t lost on Garner. “This is a story about a woman avenging the death of her husband and daughter, so I was super excited when I first read it, and I had a great first meeting with Pierre. And I had loved Taken because I felt like he had infused all of the action, all of the scenes and all of the drama with a sense of realism. Pierre knows exactly what he wants, he is very clear, and he has a real eye for action and camera, and we are always on the same page about the realism which I love.”

The other big drawcard for Garner to want to play Riley was the chance to play a female action hero and it easy to see that she was thrilled to get the opportunity. “She is an empowered woman, she is somebody who takes things into her own hands, she fights for what she needs to do, and in the end she has left quite a bit of carnage, so she is not someone I would ever hope to emulate, but what is behind it, the fact that she just looks at everybody and says “I don’t need any of you because I will take care of this. I am a Mum, and I am going to do whatever I need to do.” That I am inspired by, and I feel very much the importance of us doing a good job, of me doing a good job, and for us selling the hell out of this movie so people will come and see it and we can continue doing just this.”

Peppermint opens in US cinemas today and will open in other territories at later dates. 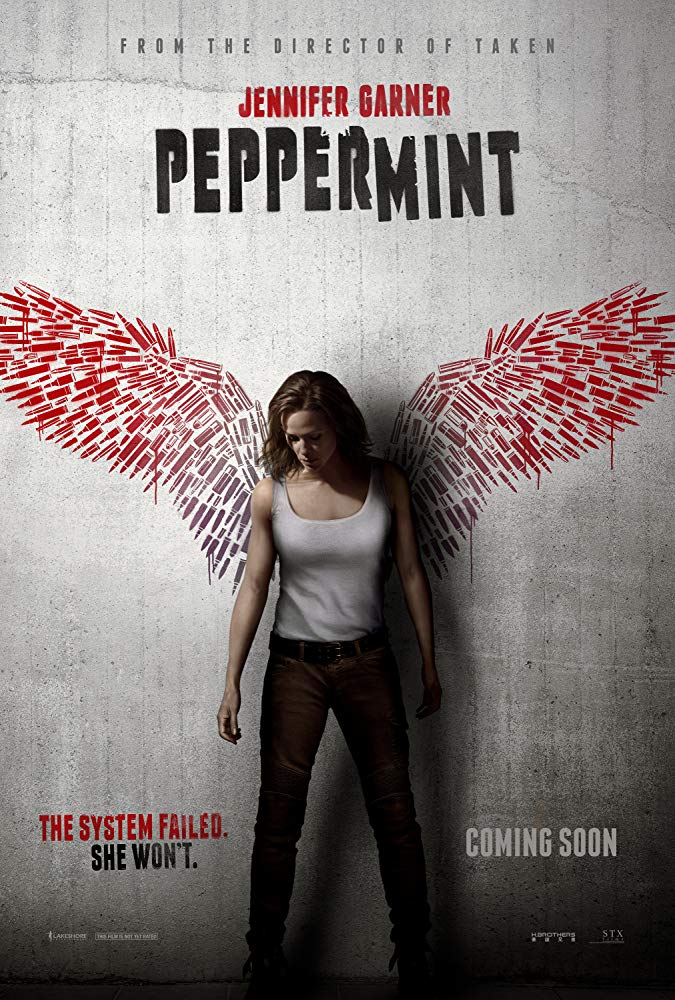