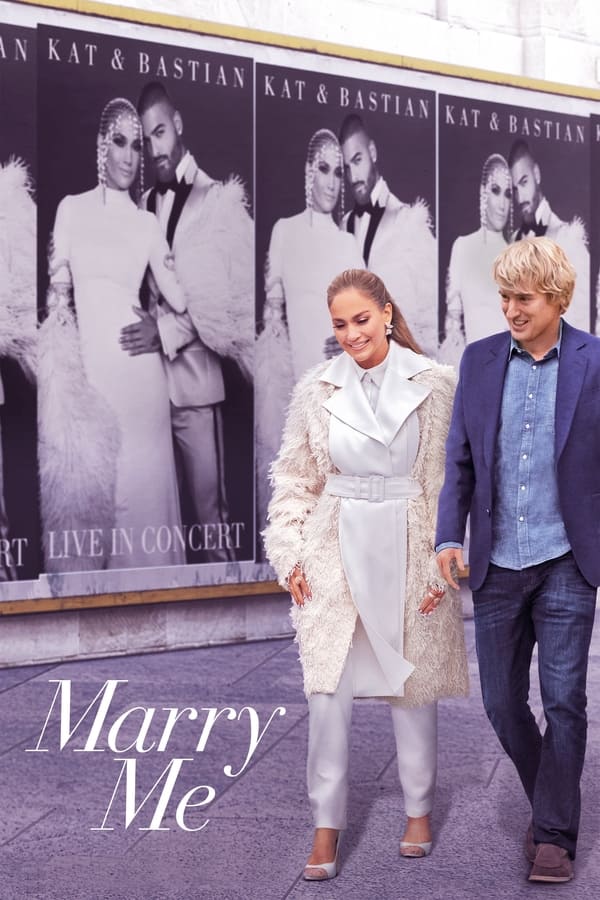 There was a time when gifted filmmakers treated the romance genre the same way they treated every other film they approached. They wanted the film to be original and showcase their skills. The result was classic romance films such as Pretty Woman and When Harry Met Sally. Yes, they were still kind of sappy but they had something different about them that made them an enjoyable watch for both women and men alike.

Somewhere along the line though it felt like there was a major change in the romantic genre. The films became generic and predictable and it also felt that filmmakers and studios had forgotten that both sexes enjoy these films. That seems to have all changed with director Kat Coiro’s (A Case Of You) new film, Marry Me, which ends up being a much needed breath of fresh air in the genre.

The film explores what happens when single Dad, maths teacher Charlie Gilbert (Owen Wilson – Marley & Me) is dragged along to a pop concert by his daughter, Lou (Chloe Coleman – My Spy), and over-zealous colleague, Parker (Sarah Silverman – Wreck-It Ralph).

The concert it is supposed to be the wedding of the year as world wide popstar, Kat Valdez (Jennifer Lopez – Hustlers), will celebrate the release of her new single, titled Marry Me, by tying the knot with her beau – singing sensation Bastian (Encanto).

The wedding is destroyed mid-concert though when footage of Bastian cheating on Kat comes to light. During a moment that her minders call a breakdown Kat decides to do something out of the blue and plucks the man she sees holding a ‘MARRY ME’ sign in the audience onto the stage and marries him – that man just happens to be Charlie.

While the world is expecting the marriage to be annulled the very next day Kat’s manager, Collin (John Bradley – Moonfall), sees their maybe PR potential in the ‘marriage’ so urges the couple to stay together for a few months.

Perhaps the most surprising thing about Marry Me is the deep topics that the film explores. From what it is like being a single father in 2021 through to the pressure that a superstar feels to have the perfect personal life it is all explored in detail through the sensational screenplay delivered by a gifted team of writers and based on the graphic novel by Bobby Crosby.

The film doesn’t just brush over these topics instead it focuses on them and makes them a key point as Kat and Charlie try to get to know each other. Even more important is the fact that the film is often told by Charlie’s point of view which gives the screenplay the opportunity to explore the emotional storyline that Charlie feels that he just isn’t good enough for a woman of the calibre of Kat. This is not a theme normally explored in cinema, outside of teenage dramas, and the result is a film that will not only be enjoyed by men but may also be very important for single fathers everywhere.

The film doesn’t forget about its female audience though as it also sees Kat wondering whether at this time in her life she should just settle for a guy even if is a sleazy cheat while also showing the pressures that woman must endure when it comes to work and a personal life and what is ‘expected’ of them by society.

There is something kind of special about this film as it features a storyline that is easily going to captivate the audience watching it while delving into some deep topics and themes that nobody will see coming.

Making the film even more special are the performances of its main actors. Owen Wilson is perfect as Charlie and casting him opposite Jennifer Lopez turns out to be a stroke of pure genius. Lopez rises to the occasion as well and while a cynic may say she is playing herself as a performer she takes her performance to the next level and brings Kat to life in an almost fairytale way. Then there is Chloe Coleman. We have said with her past two films that she is going to become one of Hollywood’s biggest stars and Marry Me just further cements that prediction.

Marry Me is one of the biggest surprises of 2021. On the surface it appears to be a fluffy romance but dig down a little and you discover a film that has some very important things to say about what it is like to be a man or woman in the dating game of 2021. Write this movie off at your peril because this is something special and once again reminds us all that romantic films can be works of art as well.