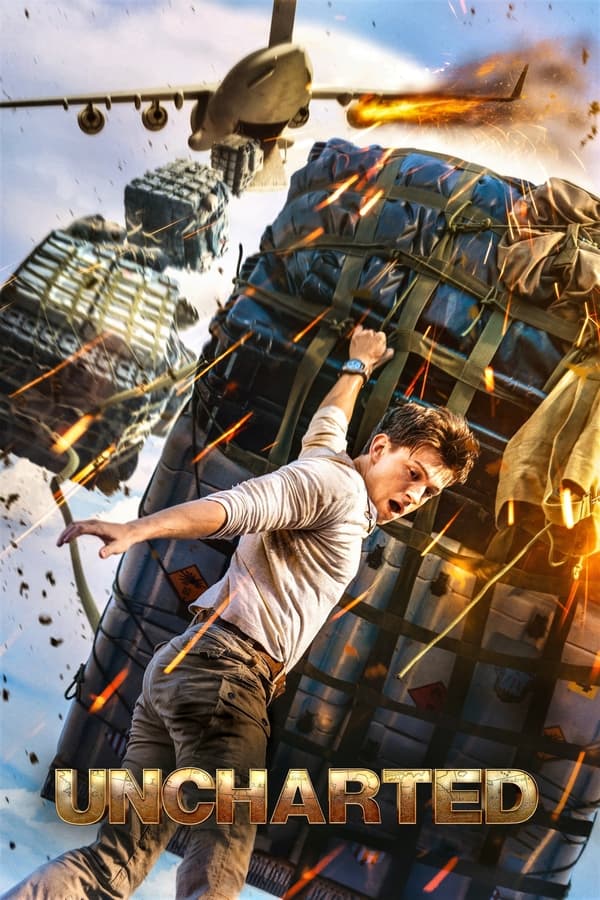 For gamers one of the most anticipated video game to film adaptations over the past few years has been Uncharred. Before Hollywood even became aware of the game’s popularity it felt like gamers were already calling out for it. And it wasn’t just gamers in front of the PlayStations who were interested to see what would happen, there were high profile actors and directors – including the likes of David O. Russell and Robert De Niro who were putting their hands to be involved should the project ever get off the ground.

Well some years later and it has taken PlayStation getting their own studio off the ground to see the film finally be released in cinemas. The good things for all of those who have been calling out for the film is that it remains true to the games themselves while remaining highly entertaining for those who have never held a controller in their lives.

Directed by Ruben Fleischer (Zombieland) Uncharted introduces the audience to the adventurous life of Nathan Drake (Tom Holland – Spider-Man: No Way Home). Introduced to the idea that famed explore Ferdinand Magellan’s crew hid a fortune of gold during their round the world voyage by his older brother Drake has always been fascinated by history.

But since his brother’s disappearance years earlier he has spent his time working in a New York Bar which allows him to steal from the socialites that often frequent it. However, his interest in Magellan’s gold comes flooding back after he meets the untrustworthy Victor Sullivan (Mark Wahlberg – Boogie Nights) who recruits him on a quest to find the elusive fortune.

Soon Drake finds himself teamed up with Sullivan and the alluring Chloe Frazer (Sophia Ali – The Wilds) in a deadly game to find the gold before the rich Santiago Maoncada (Antonio Banderas – The Mask Of Zorro) and his ruthless ally Braddock (Tati Gabrielle – The 100) find it first.

To be honest Uncharted is a much better film then it should be. Going into the film you could be forgiven for thinking that it is going to be an Indiana Jones knock-off, but through interesting characters and an engrossing plot Fleischer and his team of screenwriters have been able to give Uncharted a legend of its own… and made a pretty decent film along the way.

The film’s plot winds its way through the world that these characters live in and is loaded with so much suspense that the audience is kept guessing at who Drake can trust at every single turn. Raising the suspense even further is the fact that Fleischer reveals very early on that he is not worried about killing off main characters either.

Enhancing the film even more is the fact that while blockbusters like Death on The Nile and Moonfall were using green screen during Covid times Uncharted goes all out shooting in exotic locations which really come to the fore during the aerial boat sequences that use some of Thailand’s picturesque islands for a back-drop. This sequence is going to be one of the highlights of cinema in 2022.

Further enhancing the film are the performances of its leading men. Tom Holland throws away any of the doubts people had about Drake being younger in the film with a performance that more than cements the fact that he is one of Hollywood’s best leading men at the moment. His performance here alongside his work in the Marvel universe who perhaps suggests that he is now one of Hollywood’s most bankable stars as well. No matter what is thrown at him in this film – dramatic dialogue driven scenes with Sophia Ali, stunts where he is hanging off a plane or delivering some comedic relief  – he delivers it with skill.

Likewise Mark Wahlberg shows why he beat a list of anyone who is anything in Hollywood to land the role of Sullivan. Like Hollywood he takes to the comic side-relief lines with brilliance and of course is more than capable when it comes to action sequences.

Then there is Sophia Ali who certainly announces herself with this film. She plays a role here where the audience is never sure whether they should hate her or love here but in doing so they find themselves drawn to her and luckily it seems like she is going to have a major role in the sequel.

Uncharted goes above and beyond what any cinema fan expected it to be. In a rare double the film not only stays true to the video games it is based on but also because of its interesting characters and amazing stunts and effects becomes a film that fans of blockbuster cinema will also warm to.