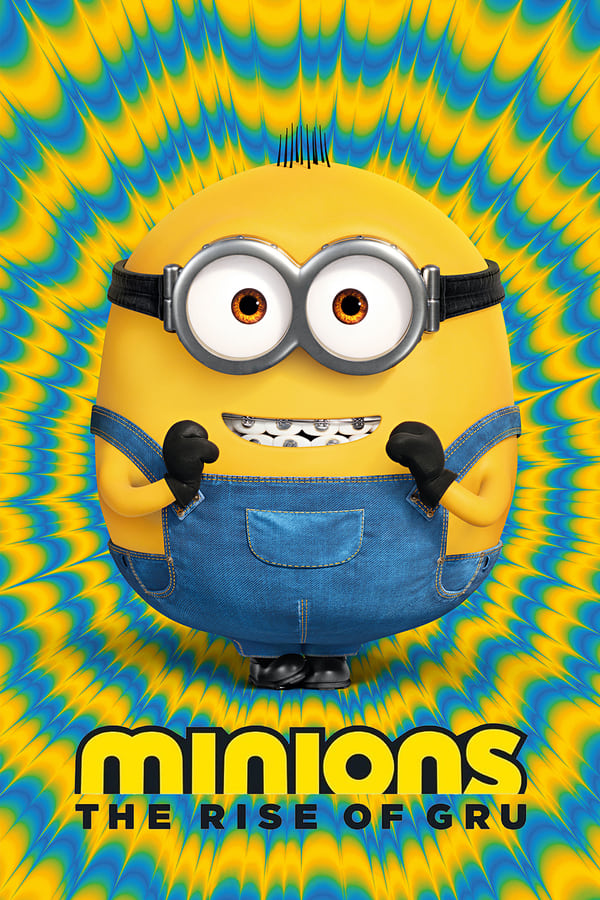 Chances are if you are a parent you have heard the Minions – those cute yellow little creatures that rarely  say things that the average human can understandable  – except of course unless that word is “BANANAS!!!”

It is hard to believe that these cute little guys have been in our lives for 12 years now. Of course they first appeared in Despicable Me way back 2010 and since then have appeared in two more Despicable Me films as well as their own spin-off feature film and a number of shorts. The one thing that cinema audiences have always been guaranteed across all of those films is that they would be funny and entertaining for the whole family.

Now the Minions and their criminal over-lord Gru (Steve Carrell – The 40-Year Old Virgin) return in Minions: The Rise Of Gru. This time around directors Kyle Balda (The Lorax), Brad Ableson (Minions: Holiday Special) and Jonathan del Val (The Secret Life Of Pets 2) take fans of the franchise right back to the beginning to show how Gru and his team of Minions not only first met but how their journey towards world domination started.

The film goes back to a pre-teen Gru that idolises a group of super-villains led by the notorious Belle Bottom (Taraji P. Henson – Hidden Figures) and hopes to become a villain himself one day. His dreams seem to be coming true when a vacancy opens up within The Vicious 6 and Gru is selected for a job interview with them. However at the interview he learns that the vacancy has been because of the disappearance of his favourite member, Wild Knuckles (Alan Arkin – Argo). Not only that but Belle Bottom and the remaining super-villains laugh at him for being a child.

Determined to prove that he is a villain Gru steals a valuable, ancient Chinese artefact while the villains are distracted. His plan is to take it back in a few days to show his worth to Belle Bottom however that plan fails when one of the over-zealous Minions loses the artefact which means once the group hunt down Gru is life is at risk. Soon the Minions find themselves on a journey to not only find the stone but to save Gru’s life.

Just like the other films that have built up the Minions’ world the first thing that hits you with this film is just how much fun it is. The screenwriting team, made up of Brian Lynch (Puss In Boots) and Matthew Fogel (The Lego Movie 2), has made sure that this is the perfect family film as it is the type of film that will appeal to both parents and children alike.

The key to that working is the fact that not only is the film set in the 1970s but it contains the same kind of humour and storyline that generations of animation fans have enjoyed. While many modern day animated films try to be too modern Minions: The Rise Of Gru uses all of the same tropes of old-school cartoons like The Smurfs, The Jetsons and The Flintstones. Just like those cartoons this film uses all the elements of comedy to get a laugh – from witty one liners right through to outrageously funny slapstick.

Likewise it doesn’t do anything too fancy with the plot. This is a genuine old-school good versus evil storyline. The difference being of course that Gru despite being the audience’s hero is also kind of evil. Remarkably even that element of the film works exceptionally well and true fans of the franchise will also notice that so many jigsaw pieces from right across the series fall into place with this film. From Gru first meeting Dr. Nefario (Russell Brand – Arthur) through to Gru first hiring the Minions it is all revealed and explained this time around.

The other thing that makes Minions: The Rise Of Gru so special to watch is that the all the adventures that Gru and the Minions have together in this film are made special by the fact that the characters around them are voiced by an avalanche of stars that include Jean-Claude Van Damme, Michelle Yeoh, Dolph Lundgren, Lucy Lawless, Danny Trejo, RZA and Julie Andrews, in fact keep an ear out for Yeoh’s character because Master Chow absolutely steals the show.

If you are looking for the perfect film for the entire family then go no further than Minions: The Rise Of Gru. This is a very special animated film that will be lapped up by fans of the franchise and is an absolute must see.