RHIANNON FISH To Star In A ROYAL IN PARADISE 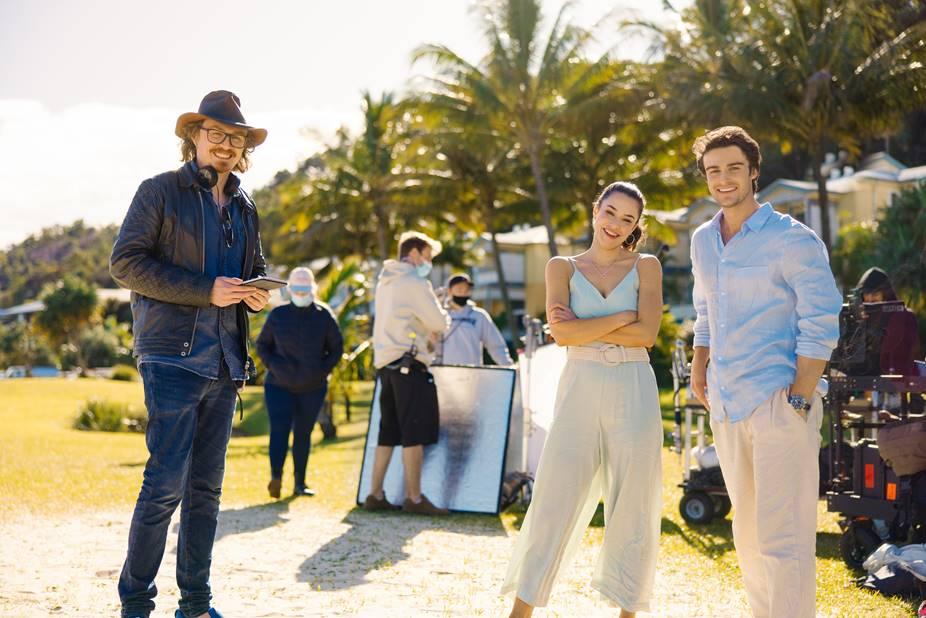 Rhiannon Fish (The 100, Home and Away) steps into the lead role for the latest romance feature film from The Steve Jaggi Company (SJc), A Royal in Paradise. With production underway in South East Queensland, the film also stars Mitchell Bourke (The Family Law) as Rhiannon’s royal love interest.
A Royal in Paradise is directed by Adrian Powers (Forbidden Ground), and written by Adrian Powers (Dive Club) and Caera Bradshaw (Dive Club).

A Royal in Paradise follows New York writer Olivia Perkins (Rhiannon Fish), a successful author on deadline for her next romantic adventure novel. The recent breakup with her boyfriend, however, has left her with writers’ block and a failing belief in love. Keen to help, Olivia’s best friend Katie (Cara McCarthy) convinces her to take a trip to the tropical Haven Isles in the hope of reinspiring her.

On the other side of the world, Prince Alexander (Mitchell Bourke) is reminded by the Queen (Andrea Moor) of his upcoming duty to marry royalty. Needing some distance, Prince Alexander decides to attend a marine conservation fundraiser on Haven Isles. On arriving at the island, the Prince and Olivia meet and form a friendship, but Alexander keeps his identity a secret. Experiencing all the Island has to offer, Olivia and Alexander grow closer, until the Prince’s true identity is exposed by a royal spy.

Rhiannon Fish comments “Having the opportunity to work in Australia again is a dream come true… especially on a project like this one. Adrian has found a very unique/modern way of telling a classic ‘fairy tale’.”

Director Adrian Powers adds “Caera and I had a lot of fun writing the script for this royal romance that embraces some beloved fairy tale archetypes while also possessing a great, modern message. I’m delighted to be directing this film with my long-time creative collaborators at SJc. We have a strong team assembled and it’s fantastic to finally be underway with filming.”

For A Royal in Paradise, SJc will once again be partnering with US-based Nicely Entertainment, following the successful global release of This Little Love of Mine and the young adult hit series Dive Club, as well as the forthcoming romance Love In Bloom. Steve Jaggi comments “SJc has found its sweet spot working across both the young adult and romance genres, and it has been rewarding to see our projects reach Netflix’s top 10 in so many territories around the world. We are spoilt for choice here in Australia when it comes to talent and locations, and we’re looking forward to continuing our successful working relationship with the team at Nicely.”

Nicely Entertainment CEO Vanessa Shapiro comments “It has been incredible to work with SJc and we are thrilled to be working on this third movie together.”

A Royal in Paradise is produced by Steve Jaggi and Kelly Son Hing, with Kylie Pascoe co-producing. Athabasca Film will manage distribution of the film domestically, while international sales and distribution will be handled by Nicely Entertainment. A Royal in Paradise is financed with the support of Asia Pacific Film Investment Group and Head Gear.

PrevPreviousNew PUSS IN BOOTS: THE LAST WISH Trailer Released
NextSHUDDER To Screen THIS IS GWARNext