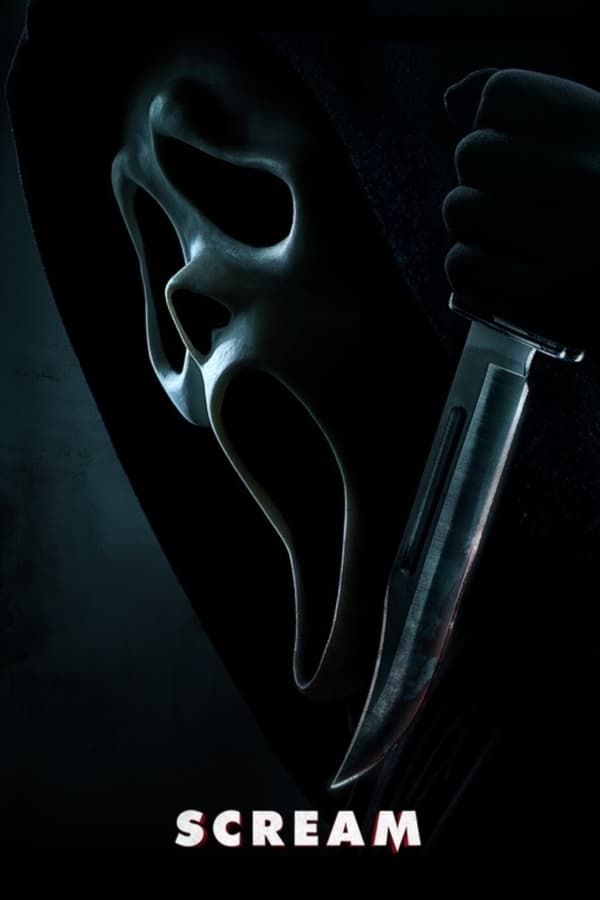 By now, in the Scream franchise, possibly the biggest mystery is posed by a simple question.

How many times can the powers that be rehash the same story line and still make it entertaining?

The answer, after sitting through the latest instalment, simply titled Scream?

As many times as they damn well want!

Before we get any further into the plot, and largely because previous instalments of the franchise have included multiple killers of both genders, I shall refer to Ghostface in the masculine term for the remainder of the review. Not because of any gender bias, but more so because HIS has one fewer letter than HERS, so will save considerable time over the course of typing this out.

NOTE: The killer (s) can/could be male, female or non gender specific so read into my use of gender as much or ltittle as you will because it will ultimately prove to be futile and a waste of your precious time…

Set 25 years after the initial murders carried out by the killer (s) dubbed Ghostface in the sleepy town of Woodsboro, Scream begins with the all too familiar setting of a teenage girl innocuously answering the telephone, as is every man, woman or child’s right in modern society.

After brief pleasantries it soon becomes apparent that this is no prank call or telemarketer out to make a quick buck.

If you haven’t guessed who the voice belongs to by this stage of the review, kindly avert your eyes now and go back to the PG section of the video store because you obviously have no class when it comes to modern horror/slasher/scary movie features.

With the simple question “Are you ready to play a game, Tara?” the carnage begins as we are once again thrust head first into the macabre fantasies and massacrist tendencies of a killer who’s identity changes at will (or when their predecessor meets his maker) and the fun begins as the race to discover the identity (s) of the latest version of Ghostface begin in earnest.

Three things are glaringly obvious from the opening scene that promise to set Scream apart in a league of its own.

One, the killers voice – which has always been altered to protect the guilty – seems a little calmer and not as threatening in tone (which has no relevance whatsoever to the events that follow). Two, this movie is set in modern times (as evident by the smart locks on the house, video calls instead of standard telephone and the cloning of mobile phones), and the third – and definitely most important, is that Ghostface has returned with more violence and a greater thirst for blood than ever before.

Even in the early stages, his modus operande has expanded from the relative simplicity of death by blade to include breaking of bones and impairment of limbs. His ferocity in attack and occasional excessive use of his trusty blade to extinguish life hints more at a killer that enjoys his work, rather than one who is killing as a means to an end.

Does that make sense?

I didn’t think so either.

Having survived the attack, Tara’s frightened friends contact her estranged sister Sam – who is now living in California – and unwittingly lure her back to her hometown and into the cleverly constructed trap that Ghostface has set to complete his as yet unknown mission.

From there the usual plotlines that have been a staple of the whole franchise are once again established, including the three rules that must be acknowledged in order to be one of the characters who receives a paycheck until the final credits.

Now, I’m not going to tell you which (if any) of these rules is adhered to this time around on the off chance it might lead your who-dunnit brain down the wrong path.

Maybe it’s all of them? Maybe it’s none? Maybe…Nope, not telling.

Of course, what would a Scream movie be without the Big Three that have run, hid, fought, defeated, been defeated and wish they were just left to the peaceful existence of their own lives?

Neve Campbell (Sidney Prescott), Courteney Cox (Gale Weathers) and David Arquette (Dewey Riley) all return to their iconic roles, each with vital roles to play if Ghostface is to be forever vanquished this time around.

Dewey has been retired from his role as Sheriff, but still resides in Woodsboro, and has the biggest role of the three in this journey. He is still clumsy (as is Ghostface), still can’t shoot straight, and still pines for the love of his life and one who got away, Gale Weathers.

Gale, still the intrepid reporter that can’t resist the lure of a good story despite the strong possibility she will become the focal point of her own tale, and Sidney, now married with children but still concealing a gun on her person to stave off the demons scarred into her brain and body, are seemingly the only hope for the new potential victims of Ghostface and, as is their right, have some of the best scenes of the movie.

KIND OF SPOILER ALERT One of them finally meets their demise at the hands of Ghostface, but if you want to know which one you are going to have to sleuth for yourself at the movie theatre.

Despite the draw power and importance of these older characters, it is the younger, new generation of helpless pawns who steer the franchise into a new era.

Melissa Barrera (Sam Carpenter) and Jenna Ortega as her sister Tara perfectly play the role of the possibly not so innocent focus of the killers’ attention, with a clever backstory involving Sam’s real father proving integral to the machinations of this film.

Mason Gooding, Mikey Madison, Dylan Minnette and Jack Quaid all head the rest of the newcomers out of the group of next likely to be killed teens and create enough tension and suspense to draw you in to the well crafted plot, despite the knowledge that each breath could be their last.

The overall feeling of Scream is less focused on humour – although comedic moments still punctuate most deaths and provide some levity to the gory nature of each killing. Instead, suspense and a sense of foreboding hang heavy in the air, creating a more tense world where the difference between life and death can be as simple as missing a phone call.

My only slight gripe on what is otherwise a highly entertaining and at times unsettling movie is the finale – or overlying story arc of Ghostface’s reason for returning.

Understandably, over the previous collection of films, most logical – and some illogical but still plausible – reasons for murder have been explored, but this one seems a little rushed when compared to the developments that led us to the big reveal.

However, that small misgiving is more than made up for in an epic and blood soaked final confrontation that proves once again that the teens of Woodsboro will always better a killer with a silly mask that looks like it has been left to melt in the sun before being worn.

Does Scream stand up to those that came before it?

Damn straight it does, and then some.

I have to admit to having reservations about the film makers ability to milk yet another movie from the franchise, but, for once, am glad to be proved wrong.

I just wish they hadn’t killed…