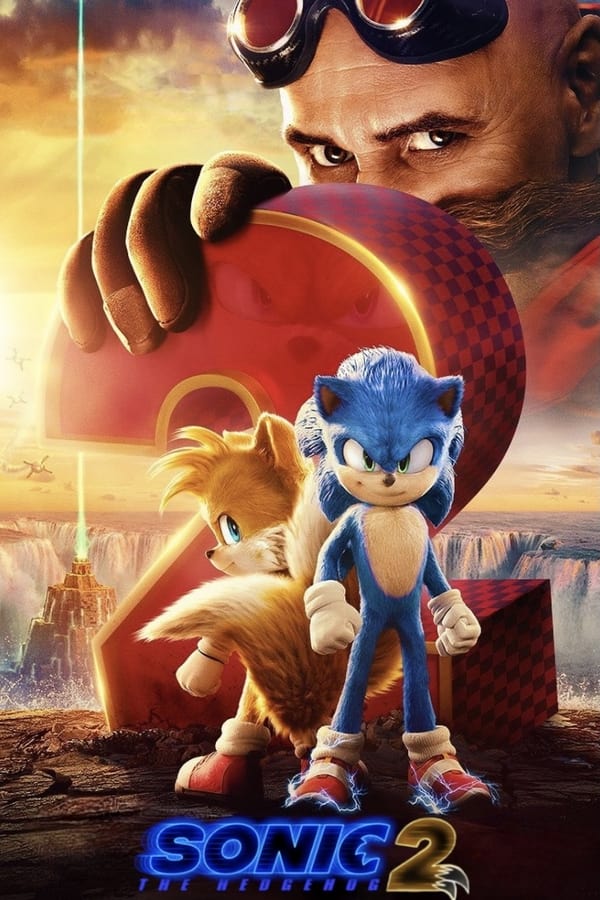 The original Sonic movie was a rarity. A movie based on a video game that was both entertaining and kept the gamers happy. For once it seemed that the filmmakers behind a film actually had a vast knowledge of the game they were bringing to life and had incorporated as much from ‘game play’ as they could.

Of course that didn’t mean that some people who grew up with the game were not nervous going into Sonic The Hedgehog 2, after all sequels often don’t live up to the expectations of a first film… especially when everything went so right the first time around. But everybody can take a sigh of relief because once again we have a Sonic film that incorporates the ‘game play’ while being a film that the entire family will enjoy.

This time around we find Sonic (voiced by Ben Schwartz – Parks & Recreation) trying to find his independence. While he still lives with happy couple Tom (James Marsden – X-Men) and Maddie (Tika Sumpter – Ride Along) he sneaks off each night to the City where he is trying to become a superhero… except his errors make him a pretty poor hero.

When he is chastised by Tom for the damage that he has caused Sonic declares “You are supposed to be my friend, not my Dad!” Desperate to try and give the young Sonic some freedom the couple decide to leave him at home while they travel to a wedding in Hawaii. But Sonic’s plans to lounge around an relax is brought to a screaming halt when Dr. Ivo Robotnik (Jim Carrey – The Mask) returns with a powerful friend, named Knuckles (Idris Elba – Pacific Rim). Their aim is to take down Sonic and claim an all-powerful gem as their own.

However Sonic also soon finds himself with an unlikely companion as well – a super intelligent Fox named Tails (Colleen O’Shanussy – Danny Phantom) who has a bag full of gadgets.

Director Jeff Fowler (who directed the first Sonic film) and his team of screenwriters once again deliver the goods with this film. Fowler’s experience on the first film really shows here as there is no inconsistency with the characters and it almost feels like this film picks up immediately after the events of the first.

Once again what we find from this franchise is a film that fans of all ages can enjoy. Little kids will the love the fast paced action and furry critters (even if they have never played a Sonic games) while adults will embrace a film that treats a character from their childhood with a good level of respect. And of course the film is well written enough to provide a few laughs along the way and is pure entertainment from start to finish.

Story wise the screenplay packs a lot in. From characters trying to out ‘ski’ avalanches through to an epic robot battle there is a little bit of everything here for the action junkies. But then there is a softer side to the film as well. The friendship that develops between Sonic and Tails is a good lesson for all the younger audience members while there is also a very strong moral delivered exceptionally well at the end of the film… I just can’t say what because of spoilers.

The inclusion of Tail and Knuckles adds another element to the films for the gamers out there and also help move the film franchise along as well. Knuckles provides a welcome relief so this isn’t just another Sonic vs Robotnik story while Tails also allows the audience to see Sonic breakaway from the depressing mood he is in at the start of this film. Kudos to the filmmakers for bringing in characters from the game and not just creating their own out of thin air.

While the human characters of the film are often on the bleachers in the film’s big scenes Jim Carrey does get more than once chance to steal the show… something that he does remarkably well. Even Carrey’s haters will have to admit after watching this film that his portrayal of Robotnik ranges from the comic to the intense as he relishes playing a character that is insanely evil.

If you loved the first Sonic movie then there is a good chance that you will enjoy the second as well. Sonic The Hedgehog 2 provides something for audience members of all ages and at the end of the day is just good old-fashioned wholesome fun.