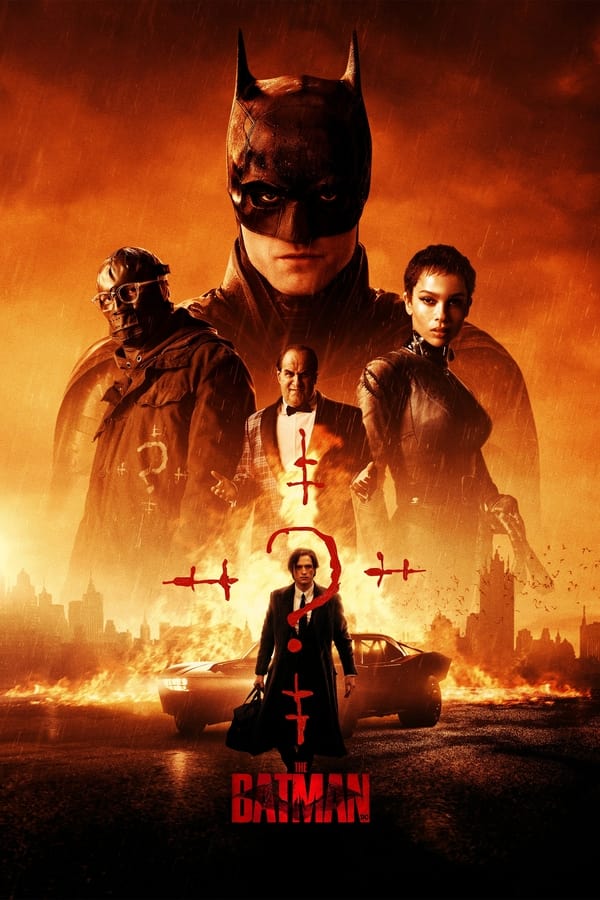 Gotham’s caped crusader Batman has taken on many different personas on screens over the years. From the campy Adam West years in the 60s through to the more serious adaptations brought to the screen by directors Tim Burton and Christopher Nolan. Of course actors George Clooney, Val Kilmer and Ben Affleck have had less successful attempts at wearing the famed black mask, but now star Robert Pattinson (Twilight) has teamed up with director Matt Reeves (War Of The Planet Of The Apes) to bring the darkest adaption of the famed comic book hero to the screen.

Reeves takes the story of Batman right back to where it began in Detective Comics way back in 1939. In The Batman Reeves portrays the character as a troubled young man determined to not only bring peace to Gotham City but to solve the mystery of his parent’s murder.

Batman (Pattinson) questions whether or not he is making a difference to the crime rate in Gotham, he has two allies in his butler Alfred (Andy Serkis – The Lord Of The Rings) and Police Detective James Gordon (Jeffrey Wright – The French Dispatch).

Batman/Bruce Wayne jumps straight onto the case to unmask The Riddler but soon finds himself in the underbelly of Gotham – a place ruled by the likes of gangsters like Oswald Cobblepot (Colin Farrell – In Bruges) and Carmine Falcone (John Turturro – Barton Fink). Clouding his judgement even more is the arrival of Catwoman/Selina Kyle (Zoe Kravitz – Mad Max: Fury Road) who seems to be friend one moment and foe the next.

What Reeves has done with the world of Batman is nothing short of spectacular. Sure it may not be the cinematic masterpiece that Nolan’s The Dark Knight was but here Reeves makes Gotham look the way fans of the early comic book series have always imagined it. Here Gotham is a dark, Gothic styled city where it seems to constantly rain. For once a filmmaker seems to have captured the essence of Gotham that so many comic book artists have drawn on the page over the years.

That tone seeps right through The Batman. From amazing shots of rain soaked city through to scenes that take the audience into the darker side of the city. Instead of being other-worldly comical villains Reeves always the criminals here to be natural looking gangsters and that completely changes this Gotham from anything we have seen on the big screen before.

Likewise as a filmmaker he turns his back on some of the cheesy adaptations of Batman as a character that we have seen over the years and instead makes him a troubled young man who is confused at whether or not he is a making a difference. Here Batman is not only a caped hero jumping off rooftops but he is also a gifted young Detective who knows how to piece together the clues. To be blunt The Batman feels more like David Fincher’s Se7en than it does any other superhero film that we have seen in the past.

Of course the question that everybody wants answered though is what Robert Pattinson is like as Bruce Wayne and Batman. People have been unfairly harsh on Pattinson over the years, largely due to his portrayal of Edward Cullen in the Twilight franchise. Since then though Pattinson has put in some worthy acting performances in films such as The Lighthouse and Remember Me. Pattinson brings that A-Grade acting to his role here. His portrayal of the troubled and deeply depressed Bruce Wayne adds to the Gothic style of the film, while he also handles the action sequences with enough skill to make you believe that he plays a pretty decent Batman.

Zoe Kravitz is also a standout as a more believable Catwoman but the stars who steal the limelight here are Colin Farrell and Paul Dano. Dano portrays the crazed Riddler sensationally well just look his portrayal of the killer in Prisoners, while Hollywood’s forgotten man, Colin Farrell, is unrecognisable in his role of The Penguin.

The Batman is perhaps the closest visual representation of the early comics that we have ever seen on the big screen. Over the past few years we have seen TV’s Gotham move away from the super-hero vibe and capture a more ‘gangster’ element to the franchise and Reeves takes that notion and makes it even more dark, foreboding and cinematic. The Batman is pure cinema magic from a visionary director who has just made his mark on a long-running franchise.