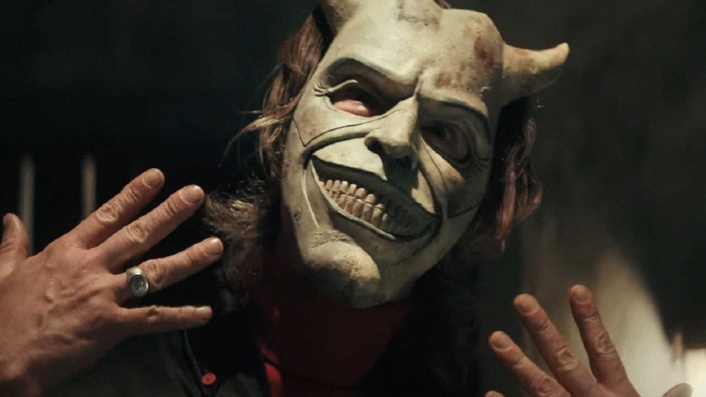 Four time Oscar nominated actor Ethan Hawke has delivered some pretty memorable characters to film audiences over the journey – but there has been one thing very unique about his career – he has rarely played a villain.

Now that is all about to change as he plays one of the most terrifying characters in modern day cinema – a child killing serial killer named The Grabber in The Black Phone. We lucky enough to recently sit down with Ethan Hawke to chat about the film.

1. Ethan, you’ve been hesitant to play evil characters in the past what drew you to want to play The Grabber this time around.

I don’t actually know what happened this time around. I remember when Scott first sent me the script I warned him before he sent it and I said “I am dying to work with you again but it is unlikely that I will do this movie because for years I have had this theory that Jack Nicholson’s whole career changed when he played The Shining. Once you unveil your madness, evil side to the world they can’t unsee it and they start to see it all your other characters.”

So I have always been sensitive to doing that but then I read it and I felt it was so much fun. The script was so good and I just enjoy Scott’s work. I loved doing Sinister and I thought to myself “well your are 50 years old and maybe it is time…it is time to change the map and it is time to embrace my inner Grabber.”

And I am glad that I do, the mask work part of it was really fun and there was something about the story that I just loved – the idea of coming of age drama come horror combined worked for me.

2. What did you find inspired you to play this sinister character?

The good news is that the industry keeps changing around us and the ways that stories are being told is always changing which also helps. That is often how I look at it, if I am always doing the same kind of movie then I will always give the same kind of performance but if I rattle up the genres than I can force myself to be a better and more dynamic actor.

3. The mask certainly puts another layer on The Grabber so what was the method of choosing what parts of the mask are worn at what time and what is removed occasionally?

Any kind of mask work allows for a kind of playfulness and it makes body language important and it makes vocal work important, but the idea that the mask itself was evolving and it would say something about the character itself. Then it was so fun to have all these kinds of masks out and decide which one to wear in which scene and Scott always had these great ideas about what he wanted, but it was so new to me. Playing this horrible kind of human being was new and there is an aspect of Greek tragedy at work as well you know, those old fashioned Greek dramas where you are representing this evil id of the universe in this basement.

What I like about the first horror movie that I did with Scott, Sinister, and this one is there is a real sense of play… we were just playing. It feels like it is midnight and you are just sitting around a campfire and you are telling everybody a spooky story and you get really into it… that is the fun of this genre.

4. You recently kind of played a villain in Moon Knight and now you play The Grabber. How did you prepare differently for this role.

I would say that Harrow in the Marvel thing was kind of the antagonist which I think is a little different to a villain. Arthur Harrow saw himself as the good guy and I can understand where Harrow is coming from, I can understand who he is where as The Grabber is another entity unto himself. It is a broken human being… it is like a computer and someone through a camera through it and now all sparks are flying out… it doesn’t necessarily make sense. So for me The Grabber is really my first villain, I didn’t even look at Harrow as a villain… he was just the antagonist.

5. Child abduction is not the nicest of topics what was the dynamic like between you and the child actors on set?

I worried about that a lot because it seemed pretty flat-out horrible and it seems to be under-selling it by saying that it was scary because it was horrible to have to come to set and terrify a young person. I had to be horrible and put a young performer through the experience of some unimaginable situations that you wouldn’t want them to imagine and yet I believe in the value of storytelling. You know with myths and legends and dark tales and fairytales they all have a value and a psychology so you just give over to it.

It was also very difficult because it was during the pandemic so there wasn’t a lot of socialising. You couldn’t let them know to go out to dinner and have a bunch of laughs, everybody had to keep to themselves that was challenging and also robbed me of one of my favourite things about movie making – being together, being together with a group of people and throwing a party – that was compromised.

These kids were so wonderful and they were so talented and they just love making movies so my fear went away really, really quickly because they understand. You know kids these days have all grown up with the movies, they have a knowledge of filmmaking that took me years to learn, the way we all talk about movies now is different than how we did when I was a kid, but I also a child actor so I am very sensitive to their situation.

Look out for Part Two of our interview with Ethan Hawke next week. The Black Phone opens in cinemas on July 21st.