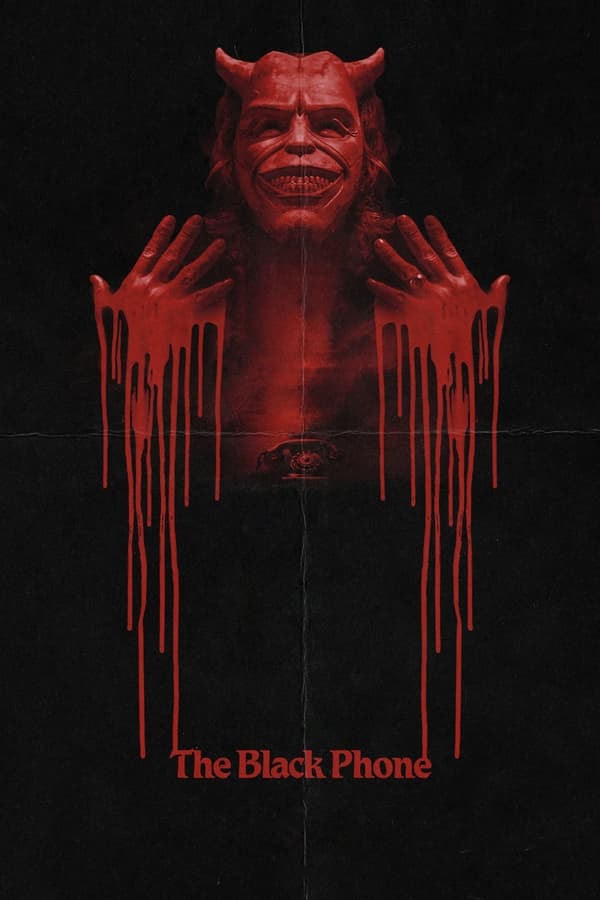 Every now and then a film comes along in the horror genre that changes the genre forever. Way back in 1999 The Blar Witch Project introduced us to the found-footage sub-genre which is still going strong today. Then of course filmmakers James Wan and Leigh Whannell in 2004 released a little film called Saw that not only introduced us to two of the greatest horror filmmakers of all time but also created what many now refer to as the torture-porn sub-genre.

Now Blumhouse Productions alongside director Scott Derrickson (Doctor Strange) are about to change the horror genre once again by showing just how nasty a serial killer movie can be with The Black Phone. This takes the suspense and claustrophobic feel of a film like Saw but gives it a villain that has normally been reserved for suspense films like Se7en or The Silence Of The Lambs.

Set in a Denver in 1978 The Black Phone shows the terror that goes through a neighbourhood when a serial killer that has been nicknamed The Grabber (Ethan Hawke – Training Day) starts a murderous spree that is claiming the lives of their children.

For siblings Finney (Mason Thames – For All Makind) and Gwen (Madeline McGraw – American Sniper) the horror comes close to home when their friend Robin (Miguel Cazarez Mora – newcomer) disappears and it is believed that he is the next victim of The Grabber.

That sparks Gwen starting to have visions of The Grabber which angers her father, Terence (Jeremy Davies – Saving Private Ryan), because it proves that she shares her deceased mother’s psychic abilities and places their family in the spotlight with Detective Wright (E. Roger Mitchell – The Hunger Games: Catching Fire) and Detective Miller (Troy Rudeseal – Halloween Kills). But soon Gwen’s connection becomes valuable when Finney is taken by The Grabber and finds himself locked in the killer’s basement.

There is no point trying to sugar-coat anything about The Black Phone – this is extremely difficult film to watch, but in a good way. Such is the style of Derrickson’s filmmaking here you find yourself feeling dirty as you watch the film because the realism of the film makes you feel that you are locked in that basement with Finney.

Wherever you turn in this film there is brutality. From the scene in which Robin viciously protects himself from a bully through to the abuse that Gwen suffers at the hands of her father – there is no escaping it and no reprieve for the audience. That feeling is intensified even more when the audience is first introduced to The Grabber.

What makes this film work so well is the fact that it constantly keeps its audience asking questions. From the very first moment the audience meets The Grabber they find themselves asking just what is this guy’s motives and what exactly are his plans for Finney. If they are not intense enough questions to be asking soon the audience also finds themselves asking questions about the supernatural element of the black phone that Finney finds himself locked in with. Are they really the spirits of The Grabber’s past victims that he is talking to and if so how the hell does that work?

Horror fans have know for awhile now that Scott Derrickson has been a director to watch. His early films, The Exorcism Of Emily Rose and Deliver Us From Evil, hinted at a director that was capable of great things but now The Black Phone solidifies that. From the period setting of the 1970s through to the extreme realism that Derrickson manages to capture in such a macabre and confronting film proves that he now needs to be considered alongside the greats of horror filmmaking.

Of course a film like this only works if the actor playing the villain puts in a career best performance and that is certainly the case here with Ethan Hawke. Hawke for a long time has been one of Hollywood’s most under-rated actors and here playing the menacing The Grabber he comes to the fore with a performance that needs to be talked about during the awards period. Even in scenes where he doesn’t have to speak Hawke’s portrayal of The Grabber is intimidating and threatening throughout… this is one of the best performances we have seen on screen for a long time.

With Hawke stealing the spotlight throughout this film it is easy to overlook the performances of Mason Thames and Madeline McGraw who despite their inexperience manage to shine in a film that they are not even old enough to watch in a cinema. Both are destined for great things with acting abilities well beyond their years.

The Black Phone is easily one of the best films of 2022. This is the film where Derrickson comes of age as a director and shows that he is now one of the horror genres leading directors. This film may not always be an easy or comfortable watch for its audience but they are handsomely rewarded for their effort with a film that is guaranteed to become a classic.