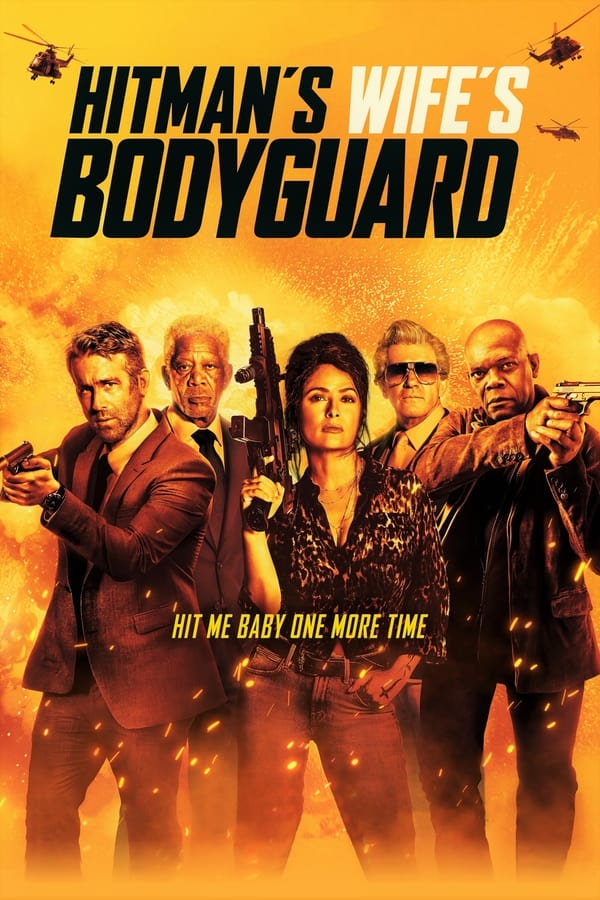 I’ve noticed over the years that often one of the reasons why sequels fail is because the filmmakers behind them try to make them too different to the original. There is often a hint of ‘well the hero learnt his lesson so he is different’ or ‘we wanted to go bigger and bolder than the first film.’ The end result is often a film that the fans of the original film end up giving a thumbs down.

Luckily Australian filmmaker Patrick Hughes (Red Hill) did not have any of those notions in his head when he approached The Hitman’s Wife’s Bodyguard. I said in my review for the original film – 2017 The Hitman’s Bodyguard – that it was a big dumb yet fun action film and that is exactly the same way that the sequel should be described.

Set a couple of years after the events of the first film legend-in-his-own-lunchbox bodyguard Michael  Bryce (Ryan Reynolds – Deadpool) finds himself de-registered as a bodyguard, something that he is having a difficult time trying to accept.

Just as a therapist talks him into taking a holiday Bryce suddenly finds himself in the middle of a blood-bath caused by the demanding and possibly psychopathic Sonia Kincaid (Salma Hayek – Dogma) who orders him to come with her and rescue her husband, notorious hitman Darius Kincaid (Samuel L. Jackson – Pulp Fiction).

As that rescue takes place though the trio soon find themselves being roped into an Interpol investigation being headed up by Bobby O’Neil (Frank Grillo – The Grey) who believes that Aristotle Papadopolous (Antonio Banderas – The Mask Of Zorro) is about to conduct a huge terrorist attack that could potentially affect the whole of Europe.

I’ll be honest this certainly isn’t a classic nor is it a film I’ll probably ever watch again but did I have fun while I was watching it – yes!!! Screenwriter Tom O’Connor (The Courier) brings the same recipe to the table that made the first film so enjoyable. As I watched this film I found myself laughing one second and then gasping the next as O’Connor again finds the right mixture of comedy and action an brings it all the table.

His screenplay does provide good laughs for Hayek and Jackson but as I was watching the film I found myself beginning to wonder whether Ryan Reynolds will ever get the opportunity to play a character that isn’t ‘cocky’ anymore. With the trailer for Free Guy seemingly showing him play another character in this realm it really is starting to feel like he has been reduced to a one trick pony – a shame when you know that he is capable of so much more.

I would also be lying if I said there isn’t another major flaw with The Hitman’s Bodyguard’s Wife. It almost seems as if having both the characters of Aristotle Papadopolous and Vladislav Dukhovic (Gary Oldman – The Dark Knight) a bit redundant. Both characters seem pretty similar and while it is fun to watch two legendary actors having fun with their characters it does seem at times throughout the film like we are being inundated with characters that only have limited screen time, so surely melding the two in together would have been a great option.

For the most part though The Hitman’s Wife’s Bodyguard is a fun film to watch. It’s wise cracks actually did make me laugh – which rarely happens in action comedies – and the action sequences were just enough to keep an action junkie happy. Unlike many action-comedies the action here is pretty full-on with head shots galore but what else would you expect from a director that gave us the very under-rated Red Hill.

If you were a fan of the first film then chances are you are going to like this one as well. The same wit and action is there to please and this time around Salma Hayek steals the show.