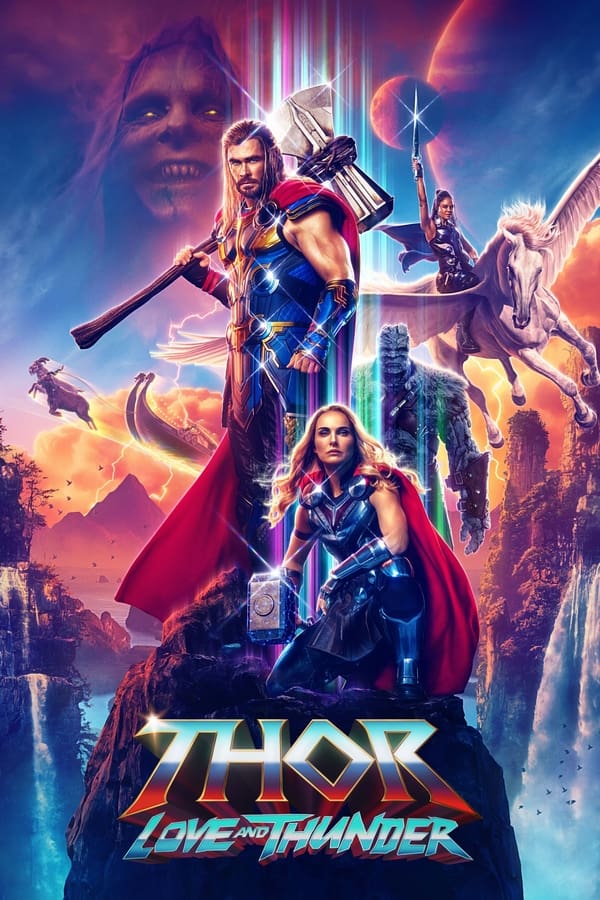 So far this year we have seen Marvel Studios go on a huge film rollercoaster. While the execs at the studio are quick to point out that Spider-Man: No Way Home was a box office success, they seem to forget that Morbius and Doctor Strange In The Multiverse Of Madness never reached the heights that they should of. But whenever somebody asks if the Marvel bubble has burst the answer nearly always seems to be people want to see films about the original Avengers. Well now the time has come to test that theory because the latest Marvel sees the return of one of the originals – the mighty Thor.

Thor: Love And Thunder begins with Thor (Chris Hemsworth – Spiderhead) getting back in shape and fighting alongside some very well-known Guardians. But when he hears about the rise of Gorr The God Butcher (Christian Bale – The Dark Knight) he decides that this is the right time to return back to the now earthly New Asgard which in his absence has become a tourist attraction.

Upon his arrival though he finds Asgard under attack with Gorr doing what he can do to destroy Asgard and its Gods. Thor instantly takes up arms with Valkyrie (Tessa Thompson – Creed) and soon surprised to realise that there is another hero keeping Gorr at bay – his ex-girlfriend Jane (Natalie Portman – Black Swan) and she is wielding Thor’s very own hammer.

As the trio fight off Gorr he flees taking Asgard’s children with him – this soon results in the trio having to seek out the mighty Zeus (Russell Crowe – Gladiator) for help while Thor has to come to terms with the fact that Jane is in fact the new Thor.

If Marvel are hoping that Thor: Love And Thunder is going to be their next blockbuster success then they may have a nervous wait to see how it goes because the film itself is so up and down it is going to split audiences. Early on director and screenwriter Taika Waititi (JoJo Rabbit) infuses his style of comedy into the film and like it did in Thor: Ragnarok it at times falls flat and feels out of place with the subject matter at hand. But it feels that later on in the movie Waititi lets that fall away and the result is a fairly decent action film with some impressive battle sequences.

It does feel a shame though that Waititi persists with the comedy in the Thor films because the result sees the once powerful God from the first two Thor films reduced to a bumbling fool at times. It is so refreshing to see that we get a glimpse of the once Mighty Thor towards the end of Thor: Love & Thunder… let’s just hope that continues in the future.

There are times throughout the film that works remarkably well. We have already mentioned some of the acting sequences but there is also a great deal of suspense to keep the audience engrossed in the movie as well. The inclusion of Gorr certainly helps with that – this is one time were we get to see the origins of the villain and once it is established just how brutal he is you get a strong feeling that not all of our Marvel heroes are going to make it out of this film alive. While Marvel has struggled with bringing memorable villains to the screen over the years they certainly shrug off that issue as Gorr will certainly stay with most people for a long time after the films ends.

Some of that credit must be paid to Christian Bale who seems to forget that he is in a comic book movie and delivers a near award winning performance. His strong performance seems to life those around him and once he shrugs off the comedic elements Chris Hemsworth seems to raise his acting stakes to match those of Bale.

Natalie Portman is also a refreshing change for the Marvel franchise with the emergence of Jane as the new Thor and Portman seems to grasp her action sequences amazingly well. She is well supported by the often over-looked Tessa Thompson whose performance as Valkyrie here is so good that it leaves the audience wondering whether or not this is the right time for Valkyrie to have her own stand-alone film. Sadly the same can’t be said for Crowe’s performance as Zeus, the usually brilliant actor will leave audience members scratching their heads at what kind of accent he is trying to pull off.

Thor: Love & Thunder is not one of Marvel’s finest hours but it is well worth a look. A must-have soundtrack of rock and metal mixed with one of the Marvel’s best villains to date makes up for the fact that at times the humour at hand seems out of place. Let’s hope in the future we see more of the Mighty Thor and less of the bumbling fool we’ve put up with for awhile now.