Will Smith interview about “ALADDIN”

Over the past couple of years it has become very obvious that Disney have created a plan that will see some of their most loved animated films re-imagined as live action films. The result was the brilliant Jungle Book and now the trailer for Lion King is also just as promising.

One of the most interesting aspects of this idea though is getting to see some of the most iconic characters to ever grace the cinemas screen suddenly being brought to life by the best actors of today. One of those roles of course is The Genie from Aladdin – a role made famous by the late Robin Williams’ portrayal of the character in the animated version of the role.

The man who has been charged with the difficult job of bringing The Genie to life after such a memorable performance is none other than Hollywood A-Lister Will Smith who was only too happy to talk about his experience on the film.

“It was much more terrifying, right,” says Smith when he begins to talk about the role of The Genie and the legacy left by Robin Williams. “You know Robin Williams did such a memorable, nostalgic job with this film, so for me when I am looking at a role, especially something that has historic nostalgic value to it I am asking myself if there is any meat left on the bone or what is it that I could add to the role and one of the major aspects was going from animation to live action. So the idea was ‘okay, live action, that is going to be different’ and the idea of being able to modernise and to be able to pay homage to the original character and to honour Robin while giving it a new voice and to modernise the Genie, I saw that there was the potential for absolute tragedy but there was potential to be able to create something that did both of those things.”

Smith is also quick to point out there are a lot of changes in this version of Aladdin, and some of those changes revolve around the much-loved characters. “You know I love what Mena (Massoud  – who plays Aladdin)  did – Aladdin has a bit of an edge. It was like Mena made Aladdin cool. Aladdin has a little bit of roughness around the edges, he’s not perfectly crystal clean and it was fun to see Aladdin brought in and humanised in that way. There is a really strong emotion that Mena is able to capture with struggle with Aladdin that I like.”

He then quickly talks about the changes for Princess Jasmine as well. “See one of the new ideas for Princess Jasmine was her desire to lead the people of Agrabah. She has an opinion and a perspective on how it should be led. And that is a modern take on the character that I think it will be welcomed by the audience and I think Naomi had a very clear position on how she wanted to deliver that and I think it will go over well… I think it is a good addition.”

“So the first meeting is in the Cave Of Wonders,” explains Smith when he is asked what the relationship is like between Aladdin and The Genie this time around. “Jafar knows that because his heart isn’t pure he would never be able to get the lamp so he is sending Aladdin in to get the lamp to see if Aladdin’s heart is pure. So Aladdin goes in, and of course his heart is pure enough to get in, and then Aladdin rubs the lamp, so the Genie’s first impression of Aladdin is ‘oh it’s clearly not you.’ He looks at Aladdin and thinks he isn’t impressive enough to have found a lamp and rubbed it so he wants to know ‘where is your boss? Who is really in charge?’ And Aladdin makes it clear that it is him that he is the only one in there. So I guess the first impression that Genie has of Aladdin is fairly unimpressed.”

One of the biggest points of praise that Aladdin has received so far is about the epic scale of the film and that is something that Smith agrees is certainly there.“Yeah the Prince Ali parade is perhaps one of the signature pieces of the piece,” he says with a proud smile. “The combination of practical and CGI is really an extravaganza, you know. It’s hundreds of extra on multiple levels and animals and costumes and stunts and singing and dancing, and the way that it was shot and the way it was captured I am just excited to sit in an audience when that happens.”

He is also only too happy to talk about what it was like working with director Guy Ritche“I was delighted after our first meeting,” says Smith. “I think it took me about ten minutes and I aws like ‘yes, I am in.’ He is between action and music and I think that his character concentration is just very different to what I was thinking about for a Disney movie but I think he delivered something that is really unique and it is clever and it is fun and it is funny in a different way – yeah, I am very proud of what he has done.”

Aladdin is in cinemas now. 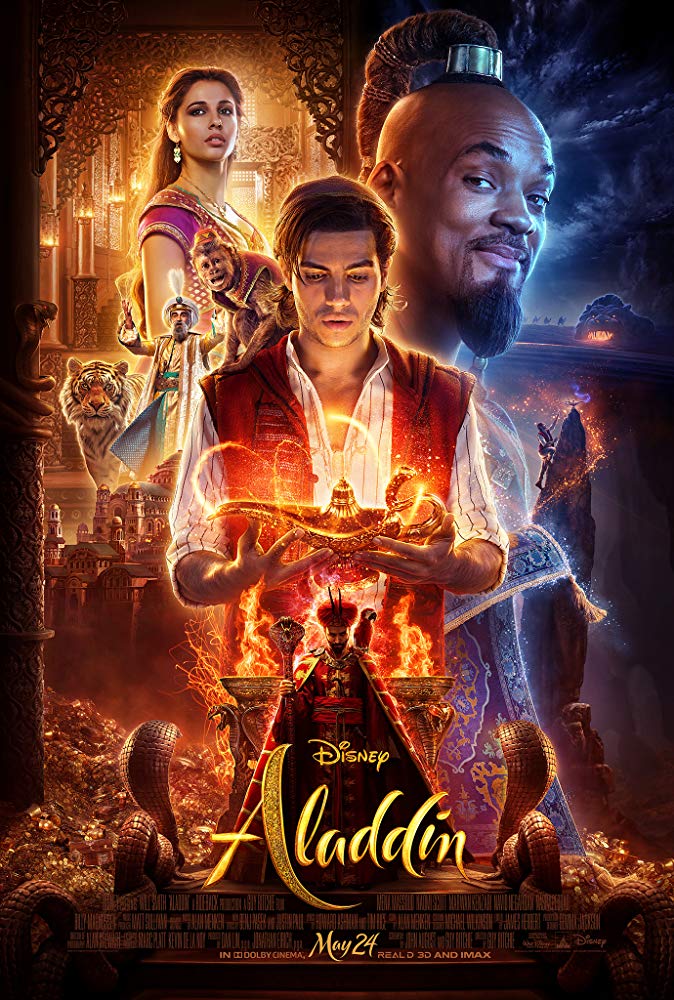