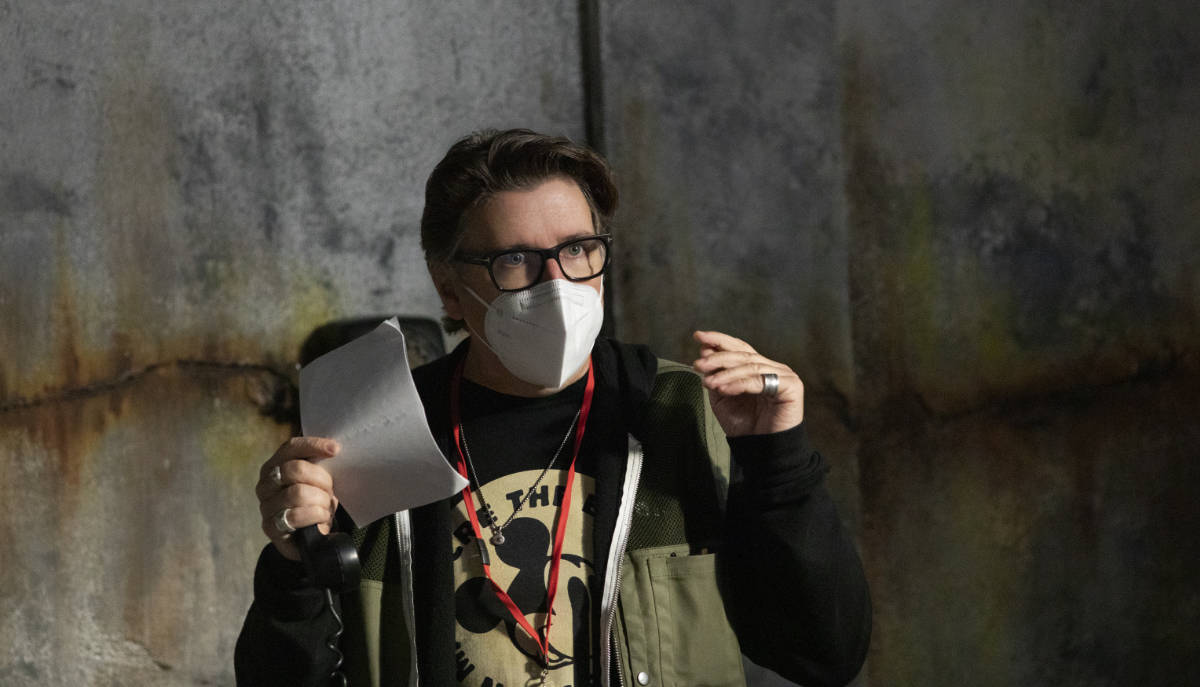 Director Scott Derrickson has wowed audiences over the years with films such as Hellraiser: Inferno, The Exorcism and Sinister cementing him as one of the best horror film directors in the industry. Then there were movies like The Day The Earth Stood Still and Doctor Strange which showed Hollywood that Derrickson was more than capable to be the man behind some major blockbusters.

Now Derrickson returns to his horror roots with The Black Phone and we are pleased that we can bring you Part One of our interview with Derrickson about the film.

1. Ethan doesn’t normally play villains how difficult was it to convince him to play The Grabber here?

Yeah Ethan actually said to me on the phone before he had even read the script “You know I don’t really play villains, right and this will have to be something special for me to do that!” But you know the characters that are memorable villains have really unique, very actor driven characteristics.

You know the way that Anthony Hopkins speaks in Silence Of The Lambs, that script is brilliant, but the way he speaks, his tone etc is not in the script that is something that the actor has brought to the table and I think Ethan does the same thing with The Grabber. He understood that the challenge was that the character wears a mask for the whole time and the I think that Ethan took that not only as a challenge but as a way to let the mask be the scary thing and it allowed him to be very truthful and to talk in a manner that was unique with this characters, and with that he was able to build out a character that wasn’t like anything that I had seen before. You know that is what great actors do.

Yes, he was surprising in a lot of the choices that he made but they were all wonderful.

2. The Black Phone was taken from a short story what was some of the key themes and plot points that you wanted to expand on with the film?

Well the main things that we expanded on was that in the short story there was only one ghost that called through on the phone and here we have five. And there was also the sister, Gwen, and of course the father and his home life. I felt that we needed a female character to be central in the story but in the short story she is an older sister and not dealt with much. Here though she becomes the soul of the movie.

The expansion of that was I think really born out of my desire to tell a story that drew from my own childhood. Before I had even decided to make The Black Phone I was thinking about making a movie that was really rooted in my own childhood, it was going to be all about my memories and I grew up in North Denver and I was 12 in 1978 and my home life and my neighbourhood life was very much what you see on screen. It was working class, blue-collar, pretty violent both in-home and out of home and there was a lot of fear about serial killers, especially in North Denver in 1978. The Manson Murders had happened not long before, Ted Bundy had come through Colorado and killed a bunch of women and then was arrested and escaped in Colorado. Then Halloween came out and on a personal antidote when I was 9 years old my friend who lived next door knocked on my door and said “somebody murdered my Mom” and his mother had been abducted, raped, wrapped up and thrown in the local lake. So the ominous serial killer that might take you from you bed or grab you on the way to school was just a really real thing for those of us of that age in 1978 in North Denver. It was just a real thing.

So I think I had a real desire to make a film set in that environment and then when I thought about merging it with the short story, which I always thought was a great idea for a horror film – I just thought it was a really unique story – that was how The Black Phone came about, it was merging of those two things.

3. How much of the film did you base on your real life?

It is very much like my childhood. The predominate emotion that I relate to my childhood is fear. When I think about my childhood what I predominately felt was fear. And I felt it predominately because of the things that you see on screen the violence both inside and outside of my home. I lived on a block with 13 boys and I was the youngest so I got bullied all the time – that was a big part of my growing up.

I was also just a very neurotic kid – you know a fledgling artist with a neurotic mind and all of those things contributed to a lot of serious things. There were also some real traumas, there was some really traumatic things that happened to me and I think that around that time when I was working on Doctor Strange 2 and the time around that I was in therapy and I was dealing with a lot of that. I was working with a really good therapist and I was just going back and dealing with a lot of the roots of why I am the way that I am.

That was a very liberating process and in the end a very, very good experience and when I was coming out of that I started to think about making an American 400 Blows, something very biographical about my own childhood but I didn’t think my childhood was that interesting and there probably wasn’t enough there to make a story on its own but when I thought about combining it with Joe’s short story I thought “ah… this is a good idea.” The film is really personal and it feels really personal which is really satisfying because the more of a personal story that a storyteller can convey it means that the story itself becomes more universal.

I think also the more specific it is to real experiences the more it tends to speak to people because people can feel the truth in it and I didn’t want to make a movie where I was being nostalgic about it or the era or the 70s or the 80s. I didn’t want to filter it through other movies or TV shows where we have seen school aged characters dealing with the paranormal… I wanted it to feel unique so that was all from my personal experience and it makes me all the more grateful for it.

4. You have some very young actors and actresses who go through some pretty intense scenes in the film. How do you prepare a young actor or actress for scenes so intense?

I wouldn’t want to put any child through a Hollywood production and certainly not let them loose into the Hollywood landscape as a career if they didn’t have good parental support, so that is always important to me. But then when it comes to the shooting process I give them forewarning with the scenes that I know are going to be demanding. With this film I spoke to Gwen about the whipping scenes a lot and we talked to Jeremy Davies about it a lot. We talked about what was going to happen and what she was going to need to do and the same with Mason. He had a long crying scene when he comes out of the freezer, so I said to him “You really need to cry, you need really be there emotionally.”

I think a lot of it is giving them a lot of forewarning and creating a safe space for them so they can feel that they are safe to go into those places, but I also just talk to them as adults in terms of the directing and I say this is why this is happening and this is the emotional condition and these are the things that I think the character is experiencing and processing in the scene and in my experience child actors can handle sophisticated emotional directions as well as adults can. They really have big things and they understand most of the things that they are experiencing most of the time and if you have done that and you have protected them and made them safe on set they will do amazing things for you. And they will always be truthful – the best thing about working with child actors is that they are always truthful with what they represent.

When it comes to The Black Phone I think that the whipping scene might be one of the hardest things to watch but I also think it gives us this extraordinary acting moment that comes from this 9 year old girl. In the back half of that scene what she does is so honest and so real and truthful and you know when it was over she was giggling and having a great time. She’s an actress and she is good at that.

Watch out for Part Two of our interview next week.

The Black Phone will be released in cinemas on July 21st.